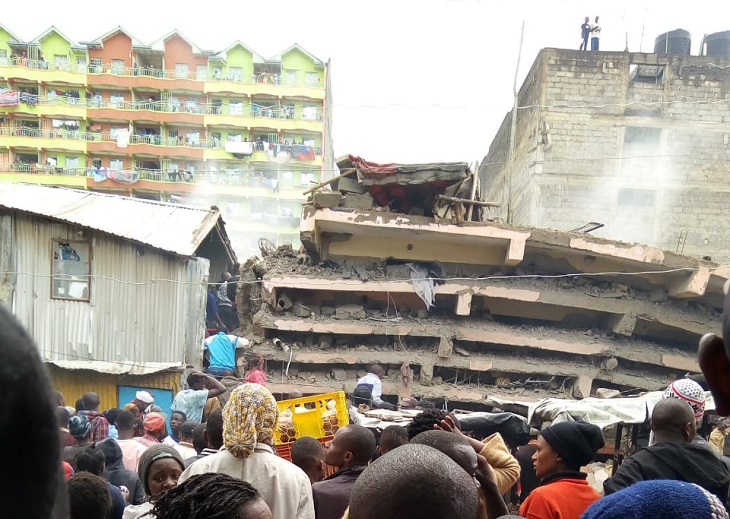 The three bodies that brought the Tassia death toll to ten were of two children a man as the rescue mission continued all the way to Sunday night.

Two more survivors were retrieved and rushed to hospital bring the total number of survivors to 36 in total.

Two bodies had earlier been retrieved on Saturday night from the Tassia Estate rubbles and were bodies of a man and a woman.

The team that has been undertaking the rescue operation includes the Kenya Defense Forces, the National Disaster Management Unit, the Kenya Red Cross and the Sonko Rescue Team who continue to strain to move through the slice-like layered concrete slabs lying on top of each other.

The Kenya Red Cross has divulged that seven people remain unaccounted for and are believed to still be stuck in the collapsed concrete rubbles.

The building in Tassia collapsed on Friday, 6th December 2019, and has since emerged that the National Construction Authority (NCA) had received numerous complaints on the safety of buildings in Embakasi’s Tassia Estate.

Activist Eric Ambuche, who runs Slums Outreach Programme, is reported to have last made an attempt to the National Construction Authority (NCA) barely two months ago but no action was taken.

“I did engage the NCA. I have documents showing that they have been reluctant. They said they are understaffed so they cannot be felt everywhere in Nairobi,” Ambuche said.

The now collapsed six-story Tassia Building had had its tenants given the notice to move out as the collapse had been foreseen given the poor construction as it had visible cracks that proved it was bellowing under its weight.

“We received reports from wananchi that the building was not in good condition. I then engaged the help of the area chief who asked people to vacate,” said Embakasi Ward MCA Michael Ogada.

“Some people moved and only 25 families had defied the orders to move,” Ogada added.

The six-storey building which collapsed on Friday killing ten people is reportedly owned by a businesswoman known as Mama Kanyoni who owns many buildings in the area and is yet to speak on the matter.