November Inflation Spikes to 5.6% on Account of High Food Prices

A man shops for groceries and fruits

The year on year (y/y) inflation for the month of November increased to 5.6 percent, from 4.95 percent recorded in October.

Market analysts from Cytonn Investments say that the inflation rate for November exceeded their projections of an increase between a range of 5.2 – 5.4 percent.

The spike in the inflation rate is mainly due to the 0.6 percent rise in the food and non-alcoholic drinks index.

The Month-on-month inflation for November also increased by 0.4 percent, which was attributable to increases in the food, housing and transport indexes.

The food and non-alcoholic drinks’ index recorded a 0.6 percent increase due to an increase in prices of significant food items including maize flour-sifted and tomatoes, which increased by 4.3 and 6.1 percent, respectively.

Due to the increase in prices of some cooking fuels such as kerosene, which increased by 2.5 percent, there was a 0.3 percent increase in the housing, water, electricity, gas and other fuels index.

Lastly, there was a 0.3 percent increase in the transport index on account of the increase in pump prices of diesel and petrol by 2.2 and 2.0 percent.

“Going forward, we expect the inflation rate to remain within the government set range of 2.5 – 7.5 percent,” said analysts from Cytonn Investments. 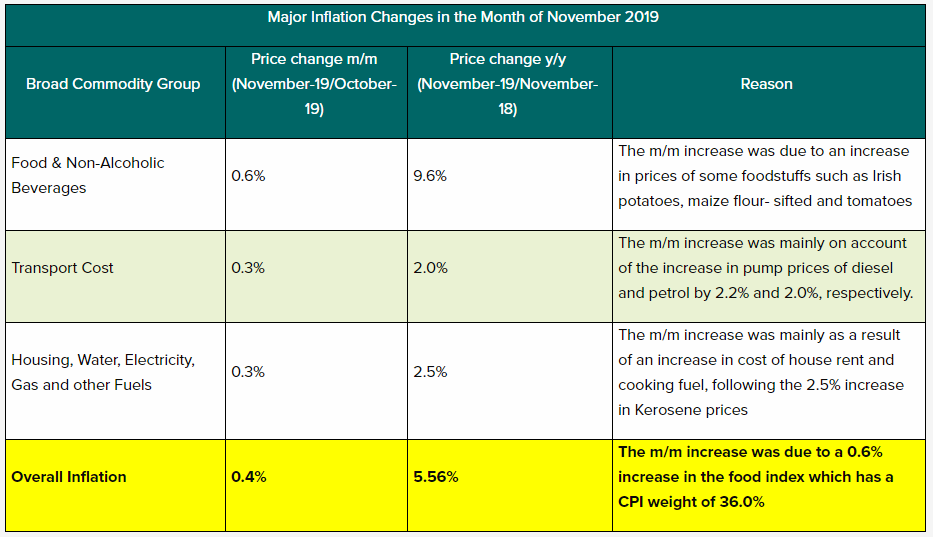 Covid-19 Uncertainties Still A Challenge For The Kenyan Shilling