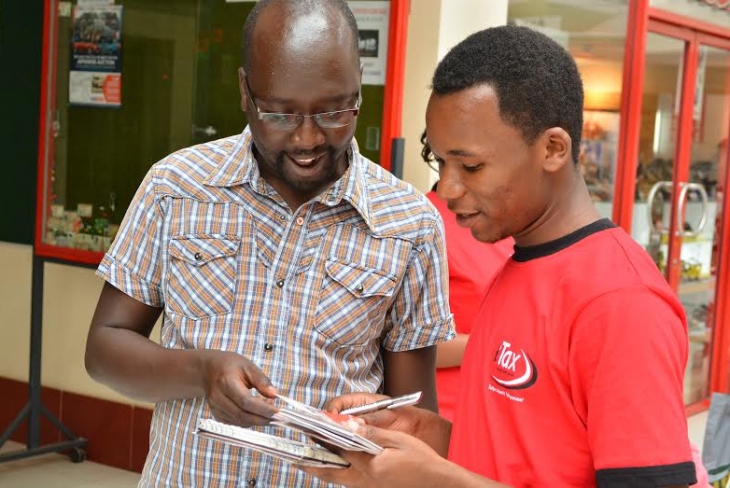 David Reri (left) is taken through the process of filing annual returns on iTAX during the ongoing count down mall activations aimed at reaching out to 100,000 taxpayers ahead of June 30th Deadline.

The Kenya Revenue Authority (KRA) has been awarded the Best Award and Exhibition Experience at the just concluded 5th Edition of the African Public Service Day held in Brazzaville, Republic of Congo for its innovative iTax system.

KRA showcased iTax as an innovation under the sub-theme “Innovations in Public Service Performance towards Accessible and Effective Service Delivery” where they scooped the award. In the adjudication, the judges focused on amongst other criteria, the uniqueness of the idea, its ability to be replicated in other African countries, its impact in public service delivery and the delivery of the innovation by the delegates. In this category, Congo Customs came in second place and Burkina Faso the third with an innovation on centralized online citizen folder documentation.

KRA’s Commissioner General, John Njiraini was thrilled at the news saying that automation of processes was key in enhancing service delivery to the public. “We at KRA are honoured by the recognition by our peers. Our commitment is to simplify and enhance trust between the Authority and taxpayers as we transition to a service oriented culture powered by technology. The role of iTax system in empowering Kenya cannot be underestimated and it is hoped that Africa will one day be recognized on the international stage as a leader in technological advancements following such influences.” said Mr. Njiraini.

iTax was successfully launched in October 2013, as part of KRA’s modernization reforms aimed at enhancing service delivery to the public. iTax is expected to revolutionize tax administration in the country by enhancing revenue collection while sealing gaps that cause revenue losses.  The system provides an integrated view of a taxpayer making it easier for taxpayers to access various tax administration services from anywhere at any time of day. The system enables taxpayers to update their registration details, file returns, conveniently pay their taxes through mobile payment services (M-Pesa, Airtel Money), enquire about tax status, apply for Tax Compliance Certificate (TCC) and lodge refund claims online in real time, just to name a few.

In addition, KRA is now able to identify taxpayers who have traded within the period 2014/2015 and who have either not filed returns or filed NIL returns.

KRA is currently riding on its success in registering 2 million taxpayers on the iTax platform in the just concluded tax filing season and has announced an achievement of the Kshs. 1 trillion revenue mark for 2014/2015 fiscal year. The iTax system has in the recent past received interest from revenue authorities in Tanzania, Liberia, Ghana and Lesotho Revenue Authorities who have sent delegations to KRA to interact with various officials and learn from their experiences. The power of the system is therefore widely acknowledged and appreciated.