Base Resources Limited (ASX & AIM: BSE) (“Base” or the “Company”) is pleased to provide a quarterly operational update at its Kwale Mineral Sands Operations (“Kwale Operations”) in Kenya, East Africa. With the consistent achievement of design availabilities and throughputs in both the wet concentrator plant (“WCP”) and mineral separation plant (“MSP”) and recoveries in the WCP, the focus remains firmly on continuing to drive product recovery and throughput increase opportunities in the MSP. 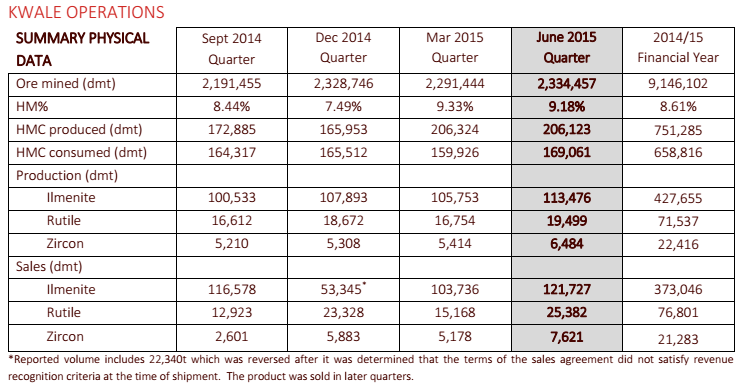 Average mined ore grades remained high at 9.2% heavy mineral (“HM”) as mining continued through a high grade section of the Central Dune ore body (9.3% HM during the previous quarter and 8.6% year to date). Tonnage mined remained steady at 2.3Mt in the quarter.

Above design WCP availabilities of 89% for the quarter (84% in the previous quarter) have offset the marginally lower HM grades, allowing quarterly HMC production to remain steady at 206kt, continuing to exceed design and allowing for the building of a HMC inventory of 114kt as part of our risk management and production optimisation plan.

Slime and sand deposition in the Tailings Storage Facility continued to operate according to plan. The Mukurumudzi Dam volume increased to full capacity of 8.6GL with the onset of the ‘long rains’, the main wet season of the year.

The increased MSP feed rate achieved in the quarter was the result of plant optimisation, with further rate increases from planned modifications expected during the course of 2015.

Rutile production for the quarter of 19.5kt represented an increase of 16%, predominantly due to higher throughputs achieved and average MSP recoveries of 98% (91% in the previous quarter). A proportion of this improvement (429t of rutile product) was attributable to the implementation in June of a programme to retreat an accumulated rutile oversize reject stockpile, which will continue into the next quarter. After adjusting for retreat gains, underlying rutile recoveries increased 5% this quarter to 96% and are now approaching the design target of 97%. Further improvements are expected from planned modifications to be progressively completed over the remainder of 2015, notably a larger rutile screen and additional magnet stages.

Ilmenite production continued above design capacity, increasing 7% to 113kt due to further improvements in MSP recoveries (109% versus 105% in the previous quarter) and increased MSP throughput. With some altered ilmenite species that are not defined as “ilmenite” in the Resource being recovered to ilmenite production, ilmenite recoveries (or yields) of over 100% are now consistently being achieved.

Zircon production improved again during the quarter, consistent with the planned ramp-up to design capacity. Average recoveries increased to 62% from last quarter’s 54% and production was further boosted through the higher MSP throughput. Planned upgrades to the wet zircon pumping systems have been deferred to the September quarter due to delays in delivery of the requisite equipment. The wet zircon pumping system upgrade is intended to increase recoveries by providing greater flow control and flexibility. Further improvements to primary magnet separation capacity and efficiencies are planned during the course of 2015, which, along with on-going optimisation work, is expected to further improve zircon recovery towards design levels of 78%.

With the aim of maximising overall zircon recoveries and revenue, Base is progressing with plans to upgrade non-magnetic tailings streams to produce a saleable zircon low grade product on an ongoing basis. Implementation has unfortunately been delayed to the September quarter as a consequence of the delays in the upgrade of the wet zircon circuit discussed above.

Bulk loading operations at Base’s Likoni Port facility continued to run well, dispatching more than 100,000 tonnes during the quarter directly to customers. Sales continue to be made from Base’s China warehouse as part of our strategy for securing market share in China by offering product for immediate delivery and in smaller volumes than could be justified for a shipment direct from Kenya. By adopting this strategy, Base is tapping into smaller scale customers not able to commit to large shipment volumes and also able to offer prospective large new customers sample size volumes for testing. Containerised shipments of rutile and zircon proceeded according to plan.

Cash operating costs for the quarter (inclusive of royalties) were US$13.5 million, lower than the US$14.2 million of the prior quarter. Costs per tonne produced (rutile, ilmenite and zircon) were considerably lower at US$97 than the $111 of the prior quarter, due to the combination of lower total costs and higher production volumes this quarter. Operating costs in the coming quarter are expected to increase due to mid-life servicing of mobile mining fleet. It can be expected that maintenance costs will trend up over time as the plant and equipment ages.

The global TiO2 pigment industry experienced its usual seasonal improvement in pigment sales volumes through the quarter, but prices came under pressure as some producers competed to improve market share. Some gains in pricing for Chinese pigment were seen early in the quarter but stabilised on the back of the increased competition in the global market.

Further reductions in global ilmenite supply, notably from Chinese producers, and the seasonal upswing in pigment demand in China resulted in some slight improvement in ilmenite prices towards the end of the quarter as well as an increase in customer enquiries for Base’s ilmenite. Prices for Chinese domestic ilmenite, in particular, made some modest gains through May and June. Increased interest in securing ilmenite feedstock supply has led to two new offtake contracts being signed with end users in China during the quarter – one for a minimum of 60,000 tonnes per year for three years and the other for 60,000 tonnes over one year.

Zircon trade activity remained firm through the quarter with strong levels of sales being maintained with established customers and prices again remaining stable. Demand should continue to improve through the seasonally strong September quarter. Zircon prices are expected to ultimately depend on how the major suppliers manage their inventories but their discipline is anticipated to continue, keeping prices stable in the September quarter.

With no serious injuries occurring during the quarter, Kwale’s LTIFR remains at zero. There was one injury requiring medical treatment recorded this quarter, with the employee returning to normal duties immediately following on-site medical treatment. A heavy emphasis on reporting of minor injuries to ensure quality of lead indicators has seen an increase in TRIFR.

Cotton commercialization has received full backing from the Kenyan Fibre Crop Directorate, which is assisting with the provision of seed and specialized expertise to aid with the expansion of the program to over 100 farmers.

Poultry program trials were completed successfully in the quarter. The learnings gained from this exercise will allow for the expansion of the program to between 7,000 and 10,000 chickens with the introduction of out-grower participation. The aim of the program is to improve productivity and quality through modern chicken rearing techniques focused on bio-controls and sustainability and the securing of access to markets through collective scale.

Environmental work is now focused on developing the biodiversity corridor which forms part of Base’s commitment to restoring threatened indigenous tree species lost to the TSF and mine footprint. Over 9,000 seedlings were planted in the quarter towards achieving this objective.

Base is working to finalise the remaining regulatory and compliance components of Project Completion.

On 15th June 2015, Base made the first principal repayment of US$11 million on the Kwale Project Debt Facility.

Base is currently pursuing a refinancing of the current debt facility with the objective of securing a repayment profile appropriate to the cash flows in the current challenging market environment and which would ensure a robust financial footing from which to grow the business.

In December 2014, Base executed a US$20 million unsecured debt facility with one of its major shareholders, Taurus Funds Management (“Taurus Facility”). The Taurus Facility provides the means to satisfy the US$15 million liquidity injection (“Additional Liquidity”) required under the terms of the Kwale Project Debt Facility restructure, and US$5 million in corporate funding. On 18th June 2015, drawdown of the remaining US$17 million was completed.

As previously announced, Base has refund claims totaling approximately US$25 million for VAT paid in Kenya, relating to both the construction of the Kwale Project and the period since operations commenced. These claims are proceeding through the Kenya Revenue Authority process, with a number of operational period claims totaling approximately US$2 million settled in early July. Base is continuing to engage with Kenyan Treasury, seeking to expedite the remainder of the refund.

Base is continuing to work with both the Kwale County Government and the Kenyan National Government to have the export levy purported to be imposed by the Kwale County rescinded (see ASX and AIM Release dated 5 June 2014) on the basis that it is unconstitutional. There have been no invoices issued beyond the one in June 2014 which Base is currently seeking to have withdrawn.

Following the retirement of Andrew King, Keith Spence was appointed as Chairman on 19th May 2015, having joined the Board on 20 February 2015. Keith brings a wealth of experience to the Board and the role of Chairman. Keith has over 30 years of experience in the oil & gas industry with Shell and Woodside. He retired from Woodside in 2008 after 14 years in senior executive roles including Chief Operating Officer and acting Chief Executive. Keith is currently Non-Executive Chairman of Geodynamics Limited as well as a Non-Executive Director of Oil Search Limited and Independence Group NL.

Keith was also Chairman of Clough Limited before its acquisition in late 2013.

Britam Projects a 25pc Profit Decline in its 2017FY Results