If You are Poor at 35, You Deserve it

Yes, I have no apologies for saying that you deserve to be poor if you are still so at 35 years of age. These are not my words, I was shocked also when I read what Mr Jack Ma said so. At first, I thought he was being insensitive and boastful or he was just simply out of touch with the reality down here.

But comes out I was utterly wrong to have thought so after getting to know his reasons. And then, there is Lee Kuan Yew, his teachings and advises to the world are as important as the air we breathe every second of our lives.

For starters, let me bring you to speed about this two great men. According to Vulcan Post, Mr Jack Ma is a Chinese Internet entrepreneur. He is the Executive Chairman of Alibaba Group, a family of highly successful Internet-based businesses. He is also the first mainland Chinese entrepreneur to appear on the cover of Forbes Magazine and ranks as one of the world’s billionaires.

Mr Ma was named the Financial Times’ 2013 Person of the Year because he personifies the Chinese internet, referring to him as the “godfather of China’s scrappy entrepreneurial spirit.” And as captured by CNN; Lee Kuan Yew will forever be remembered as the man who transformed a mosquito-ridden colonial trading post into a prosperous financial center with clean streets, shimmering skyscrapers and a stable government.

Born in 1923, Lee became Prime Minister in 1959 when Singapore, a tiny spit of land with no natural resources and a polyglot population of Chinese, Malays and Indians, was still British territory and beset by riots and unrest. He presided over Singapore’s bitter split from Malaysia in 1965 and molded the independent country into the global economic powerhouse it is today. “I was trying to create, in a third-world situation, a first-world oasis,” Lee told CNN in 2008.

Lee’s thinking also had an international impact. His brand of capitalism — which stresses the role of government rather than the free hand of the market — has provided a blueprint for China’s landmark economic reforms. He went to be with the Lord on March 23, this year. Now that we know these two great men, sit back and learn why you are if you are poor at 35, you surely deserve it.

Read: Biggest risks and opportunities for wealth creation around the world

For real, you do not expect us to feel sorry for you at 35, when all you do is wake up when the sun is at the center of the world. If you sleep more than you stay awake, you are a problem to the society. You are a disgrace to your parents.

And if you stay awake more than you sleep but do nothing productive about yourself or the community, you are an embarrassment to the rest of the human race. And if you sleep too much, wake up late and get confused the whole day, even if you do something productive, you are a bogus man who doesn’t know how to plan for your life. You lack priorities.

On June 13, 1965, Lee Kuan Yew said: “Today, I was a bit late because I took some time in getting up; slept late last night; some work to be done; two functions in the evening. But that is important. I like to tell you this because I think this is what we all must do: ‘sleep well of nights’.

You know Shakespeare, ‘Give me men that sleep well of nights’. That is what he said. I think it right. Men who worry, you know, read all this, and they start shouting all this they get worried themselves, night time comes, they can’t sleep. Next morning they wake up, mind befuddled, wrong decisions, more trouble!”

Everyone has a responsibility to make sure they plan for their lives in an orderly manner and this also the Bible supports. Imagine, if during creation, God was disorderly. Imagine God being lazy during creation. If God himself, was orderly, while should any of us be disorderly and visionless?

According to Lee Kuan Yew, it is not possible to influence young people. You can influence the basic attitudes from the day they are born to about 16 or 17. They have a mind of their own and they are influenced by what they see around them and by their peers.

Now, if you are 35, and you still come back to your mother’s house for breakfast, lunch and dinner, what should we call you? What do you want us to say about you? In fact, according to our traditions and culture, a man should never step foot in his mother’s kitchen after circumcision.

At circumcision, one becomes a man and a man has to fend for himself, his family and the community. It becomes even disturbing when such kind of man has no known disability, has gone to school yet he behaves like a teenager.

Yes, life is not just eating, drinking, television, sex and sleeping. The human mind must be creative, must be self-generating; it cannot depend on just gadgets to amuse itself, as lee Kuan Yew said in 1970.

And yes, you are poor because you have no ambition.

Mr Jack Ma says before he founded Alibaba, he invited 24 friends to his house to discuss the business opportunity. He says after discussing for a full two hours, they were still confused and that he may not have put himself across in a clear manner then.

Mr Ma says that out of the 24, 23 told him to drop the idea, for a multitude of reasons, such as: ‘you do not know anything about the internet, and more prominently, you do not have the start-up capital for this’. He says, there was only one friend (who was working in a bank then) who said: “If you want to do it, just try it. If things don’t work out the way you expected it to, you can always revert back to what you were doing before.”

Mr Ma says that he thought about the idea for a night and by the next morning, he decided he would do it even if all of the 24 people opposed the idea. But there was another hurdle in his journey, opposition from family members and friends.

“Looking back, I realised that the biggest driving force for me then was not my confidence in the Internet and the potential it held, but more of this:  “No matter what one does, regardless of failure or success, the experience is a form of success in itself.” You have got to keep trying, and if it doesn’t work, you always can revert back to what you were doing before,” he advises.

According to him, people lose out in life because of these 4 reasons: Being myopic to opportunity; looking down on opportunities; lacking understanding; failing to act quickly enough and because they lack ambition. Ambition is living a life of great ideals; a magnificent goal in life that must be realized.

The depth of your ambition will automatically define your future’s potential. So if your ambition is to wallow in the dungeon of drunkenness, drug abuse, sex abuse, you will forever remain in that dark hole for all your life. It is true that we all dream but unfortunately we do not dream equally. Remember that those who dream in the recesses of the night in deep sleep wake up to find all was vanity.

Written by Tolbert Mark Simiyu and edited by Juma Fredrick

Co-op Bank Should Be Commended For Helping Farmers Get Funding

Diesel Prices Down By 2.18 Shillings In The New Review 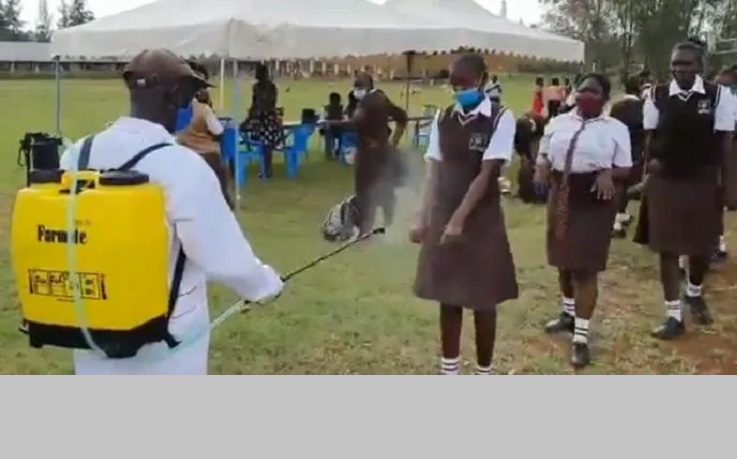