As the days fly by, seconds turning into minutes, minutes into hours and all combined building up days, four Kenyans continue to languish in a prison in South Sudan calls, cries and tears to have them released continue to fall on deaf ears of both the Kenyan and South Sudanese governments.

It all began on the 29th of May 2015, when four Kenyans who were working for Click Technologies in South Sudan were arrested without an arrest warrant and without being given a chance to have access to a legal representation or a lawyer. The four arrested were Antony Mwadime, Ravi Ghaghda, Boniface Muriuki and Antony Keya.

The four were taken straight to the pathetic prison in South Sudan, one used to hold hard core criminals and after 40 days, Ravi was released. He was allowed to step out of the horrible prison and given permission to return with the ambassador the next day. The ambassador did not show up. Ravi has arrested once again. The Kenyan ambassador to South Sudan had abandoned them at their hour of need.

They were detained for nine months without trial. During that period, their families and friends in Kenya were besieging the Kenyan government, through the Ministry of Foreign Affair under Amina Mohammed to help the release of the four Kenyan sons detained in a strange land. There please and cries fell on deaf ears with officials at the foreign ministry taking them around circles with endless promises that ‘something was being done.’ On February 2016, the four were finally taken to court for the first time since the arrest. They were charged alongside 12 South Sudanese nationals for the loss of 14 million US Dollars and other 30 million South Sudanese pounds.

As the trial was going on, the lawyer representing the four Kenyans was not allowed to be in contact with them. He was only allowed to see them in court. at one point, the lawyer was threatened at gunpoint, in front of the judge and was forced to drop the case. There was open and continuous witness intimidation, both within and without the court premises. Some refused to appear before the court and others forced to denounce their testimonies.

When the Kenyans asked for the bailout, the judge, without blinking or without any reference in the law set that each individual was to give 14 million US Dollars. The amount was actually out this world and the families could not afford to raise the amount even if they carried a fundraising all across the country.

On the 13th with no mention in Court of Kenyans and this was acknowledged by the Ministry of Foreign Affairs, the four Kenyans together with 12 others from South Sudan were sentenced to life in prison of 72 years.

Families then visited Honorable Aden Duale at the Parliament who questioned Amina why these Kenyans for the sentence to which she responded that the government is aware the 4 Kenyans were wrongfully convicted with No evidence linked to them.

With several back and forth nothing came to light until when Salva Kiir visited Nairobi a few months ago and families ended up outside Intercontinental with a prayer vigil and urging to meet to give him a letter from families. With this event, he went back to South Sudan and the supreme court after eight months read their verdict of they quashed the case and sentence #FreeSSudan4 and the other 12 South Sudanese as well. They also ordered a retrial BUT to the same court and same judge.  This verdict was 11th April 2017. A few days later, the lawyer representing the 4 was barred from practice – his license got canceled to frustrate him.

This also led to a judiciary strike with the demand of dismissal of current chief justice in South Sudan. it’s been about two months and the judiciary is still in the crisis.

These 4 Kenyans are held on remand in prison. With the crisis in South Sudan, their life is at high risk. Even read an article of deadly disease attack in Juba main prison last week. 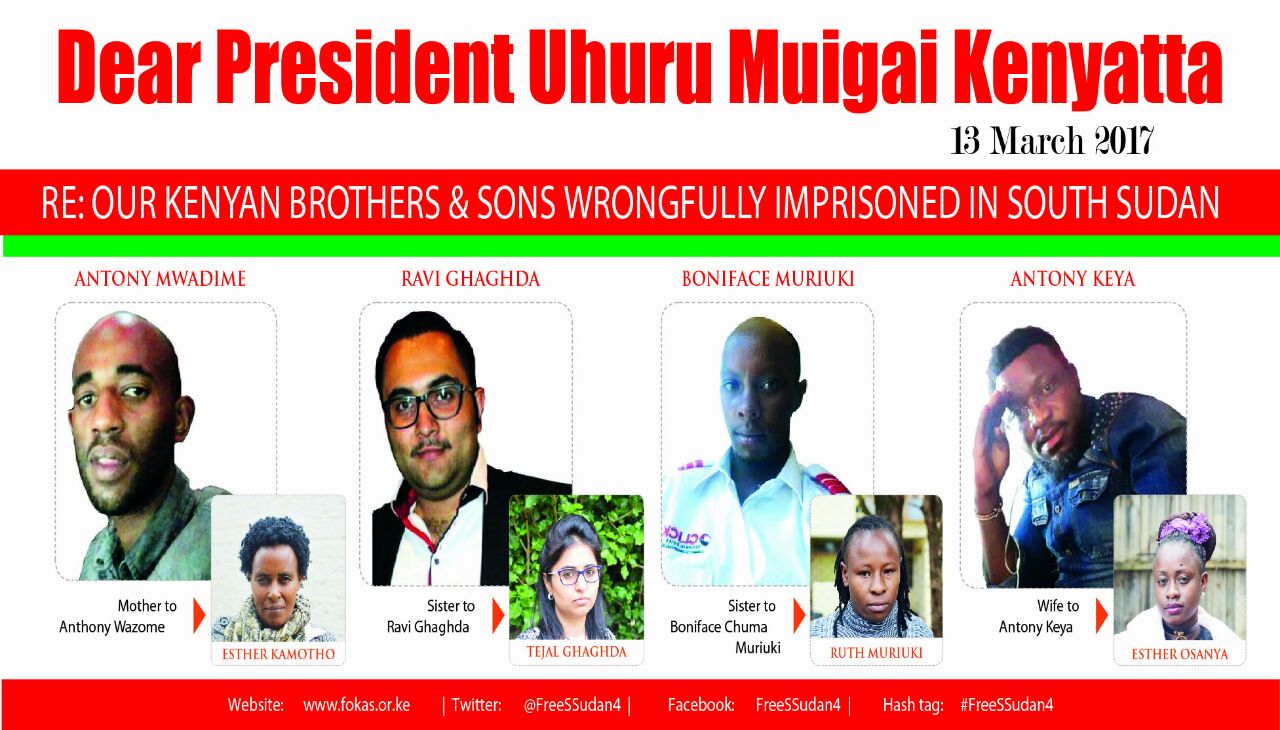