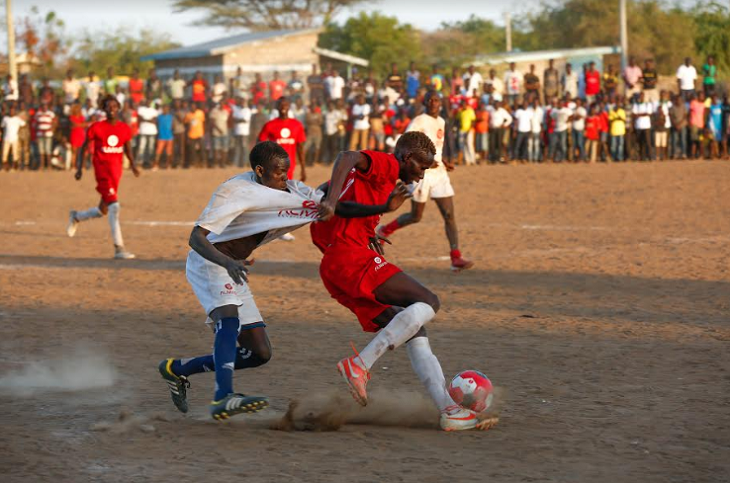 Lodwar, in a bid to foster unity, cohesion and develop grassroots youth talents, the County Government of Turkana with support from Almasi Beverages Company recently held a youth football tournament in Lodwar Town – the County headquarters.

During the finals held at the Lodwar Prison ground, Loima out-lasted Turkana Central to lift the tournament’s trophy and Shs. 90,000 in prize money through post-match penalties. The teams had earlier settled for a barren draw inside regulation time. The second and third-placed teams took home Kshs60, 000 and Kshs30, 000 respectively.

“We have seen great talent on display today and we are happy Turkana youth have the talent to play in professional leagues,” said Phillip Gikunju Almasi General Manager.

Turkana Central was the first on the spot and Masuk made no mistake with a superb conversion. Loima’s skipper Emoni David also scored the first penalty for his side. Turkana Central scored its second and third spot-kick as Loima faltered in its third.

It took the hands of Loima goalkeeper Leviticus Kuya who by the tip of his fingers saved the first penalty of the day to bring the scores to the level point. Turkana Central lost its fourth and fifth shots. Loima went on to score the fourth and fifth goals through Johnstone Areki and Mohamud Yusuf for a 4-2 scoreline.

Despite the scorchy and dusty pitch, the boys exemplified great talent.

In the third playoff played at Lodwar Primary School grounds, North Turkana outclassed South Turkana by 2 goals to nil. Edward Luchuchu and Gilbert Esikuku scored one apiece to see their team to the third position of the inaugural youth tournament in Turkana County.

“We are glad to have the County Government of Turkana working to give the youth an opportunity to develop their skill in football as a company we reiterate our commitment to support the youth in Turks a County through sports,” said Phillip Gikunju Almasi General Manager.

Almasi promised to continue its partnership with the County Government of Turkana and support for youth through employment and sports sponsorship. The company pledge to sponsor the tournament again next year starting from the ward level up to the County finals.