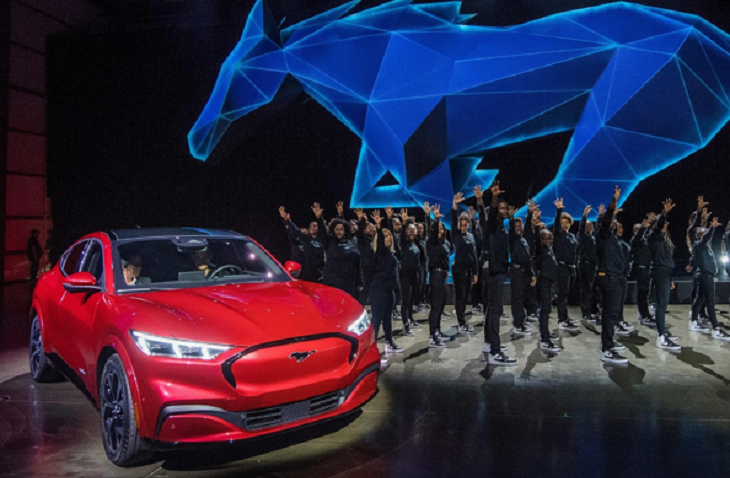 Ford Motors announced for the first time an all-new electric Mustang March-E. It’s a performance SUV that will redefine the automaker’s line up and expand the iconic pony car name to a new generation of car buyers.

The 2021 March-E was unveiled on Sunday night in Los Angeles. It’s the first vehicle to be based on the company’s’ new EV architecture as part of the £11 billion plan to develop new all-electric and hybrid models by 2022.

It marks the first time to use the mustang name since a debut in 1994 when it was used on a two-door pony car.

Top performance models of the Mach-E will achieve 0-60 miles per hour in the mid-3-second range with an estimated 459 horsepower and 612 lb.-ft. of torque. That makes it faster off the line than a Porsche Macan Turbo and in-line with the Mustang Shelby GT500 and Tesla Model Y.

The Mach-E debuts Ford’s next-generation SYNC infotainment system that includes a customizable area that can learn a driver’s preferences and make personalized suggestions, according to officials.

In addition to the touchscreen, drivers can use a single rotary knob located near the bottom of the screen to control the system.

The Mach-E will be produced at Ford’s plant in Cuautitlan, Mexico. It will be the first vehicle sporting the pony badge to be produced south of the border in decades.

Ford previously reiterated that the company is America’s top producer of vehicles and the largest employer of UAW-represented autoworkers. More than 80% of the vehicles Ford sells in America are built in the U.S., including the Ford Mustang at its Flat Rock plant in Michigan.