Ministry of Interior Auctioning 75 Vehicles for as Low as Sh.18,000

The Ministry Interior and Coordination of the National Government has announced that it will be auctioning some of its 75 vehicles with some going for as low as 18,000 shillings.

All interested bidders are expected to make payments and view vehicles from November 5 to November 20, 2019.

The 75 vehicles which were gazetted on Tuesday will be available at respective stations with interested bidders required to pay a non-refundable fee of 500 shillings. The fee payment should be made in cash at the Administration Police Service at Jogoo House.

Interested bidders are required to pay a refundable deposit fee of 10,000 shillings for the auctioned vehicles.

After payment of the 10,000 shillings’ deposit, the bidders will have to acquire bidding numbers that will be used to enter the auctioning yard.

“Bidders are required to obtain a bidding number after payment of a deposit, which will also serve as an entry pass to the auction yard. NO BIDDER WHATSOEVER WITHOUT A BIDDING NUMBER WILL BE ALLOWED TO THE AUCTION YARD.”

Interested bidders will verify details for themselves as the vehicles are neither warranted by the ministry nor the appointed auctioneer.

The successful bidders will have to pay a deposit of 25 percent of the purchase price by the close of business of the auction date and the balance of 75 percent within seven days.

If the successful bidder fails to complete the payments in due time, 25 percent of the deposit will be forfeited and the item will be disposed of at the sole discretion of the Ministry of Interior (GSU).

The purchased items MUST be collected from MICNG’s (GSU headquarters) within 14 days after full payment failure to which the paid amount will be forfeited and the item will be disposed of at the sole discretion of MICNG (GSU).

The successful bidders will be required to pay for all costs applicable duties and taxes that are associated with the transfer of the ownership of the purchased vehicles and other items.

“All payments to be made in cash or bankers cheque in favor of Ministry Interior and Coordination of the National Government (GSU) cash office at Ruaraka.”

The Deposit of successful bidders will be credited to the bid price so that it forms part of the amount of the bid and the bidder will be required to pay the bid less the deposit.

Unsuccessful bidders will be refunded bid deposit on presentation of original receipt for the bid within a reasonable time after the auction. 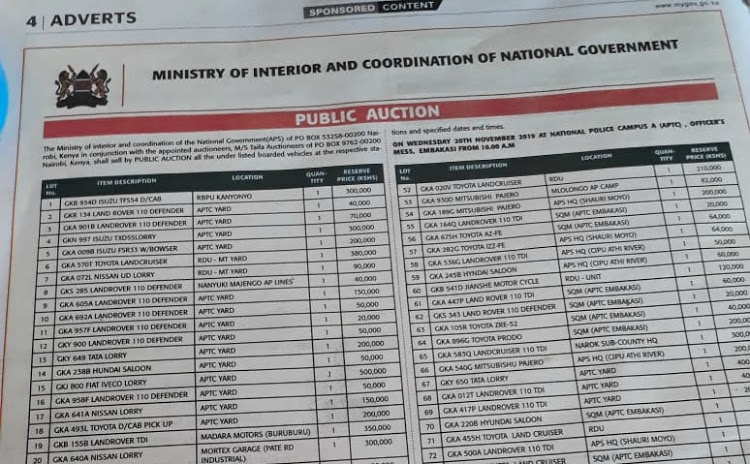