Safaricom’s Half Year Earnings Up To 49.8 Billion Shillings 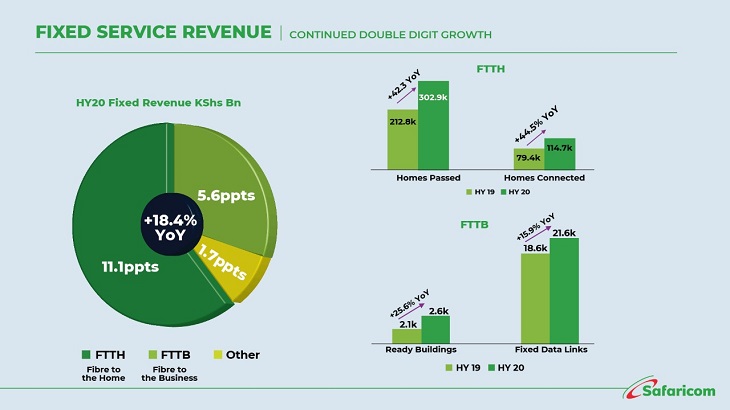 Safaricom PLC has announced its half-year financial results registering a jump in its earnings before taxes and interest by 12.7 percent to 49.8 billion shillings for the period ended September.

Safaricom has attributed the increase in earnings during the first half to its mobile financial service, M-Pesa as well as its interest access provision.

There were fears that the results would slightly dip following the disruption of the gaming sector which contributed immensely to revenue that was being collected via M-Pesa, especially after the closure of SportPesa and Betin.

The company also prides itself having increased its market share and growing a 30-day active customer base by 8.9 percent. The company has also set up 732 additional 4G sites that have already been rolled out, covering 63 percent of the population.

The results come a few days after the telecommunications giant announced the appointment of Mr. Peter Ndegwa, a Kenyan, as the CEO following months of speculations over the next CEO with others lobbying for certain individuals.

Mr. Ndegwa will officially take over as the CEO of the largest telecommunications company in East and Central Africa on the 1st of April 2020, taking over for the current CEO (in an acting capacity) Michael Joseph.

Mr. Ndegwa joins Safaricom from Diageo PLC where he is the Managing Director of Diageo Continental Europe and according to the board he brings a wealth of experience in General Management, Commercial and Business Strategy, Sales and Finance Operations, having spent over 25 years in various roles within the Financial Services and Fast-Moving Consumer Goods (FMCG) sectors in Africa and Europe.

In his current role, Peter oversees the operations of Diageo PLC in 50 countries in Western and Eastern Europe, Russia, the Middle East, and the North Africa region.