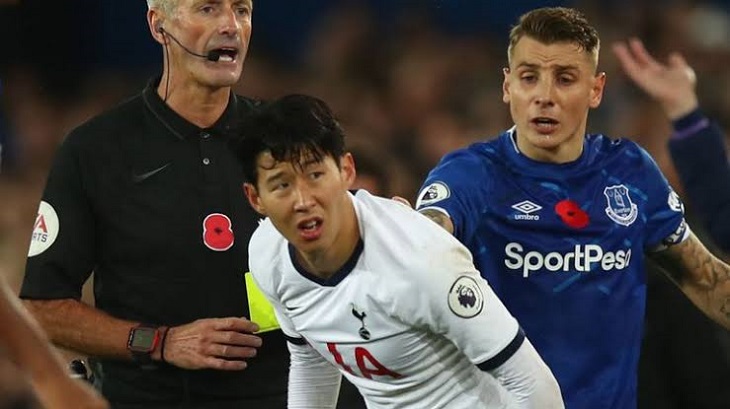 Heung Min Son will now be available for Tottenham Hotspurs’ next matches after his Red Card against Everton’s Andre Gomes was overturned.

Heung Min Son had been sent out after a horrid tackle on Andre Gomes when Tottenham was playing against Everton on Sunday.

It was not clear who caused the injury on Andre Gomes as Heung Min Son had tackled him first but he later clashed with Aurier.

As a result of Son’s tackle or Clash with Aurier (who most people thought was the one supposed to be booked), Andre Gomes suffered a fracture-dislocation to his right ankle.

Son who looked extremely devastated for his action on Andre Gomes walked out of the match that ended up in draw of 1-1.

The Spur’s decision to appeal the red card issued against Son to an Independent Regulatory Commission and the club succeeded.

“Heung-min Son will be available for Tottenham Hotspur FC’s next three domestic fixtures after an independent Regulatory Commission upheld a claim of wrongful dismissal,” FA announced.

Spur’s manager Pochettino said Son is in a good state of mind and is ready to play for the next match that will be played on Wednesday.

“Son is OK but was devastated after the action. It was a mixture of everything,” Pochettino said.

“It was a mix of the injury, a mix of the red card and the situation in the game was an emotional moment for everyone.

“Of course, now after a few days, everyone is available to play. He is in a very good way, he feels sorry like everyone, but he is in good form,” he added.

Meanwhile, Everton said that Andre Gomes was discharged from the hospital after he underwent successful ankle surgery. He is currently recovering “extremely well”.