The government through the ministry of interior has declared a deadline extension for the voiding of the old passports to March 2021.

The old passport was to be void in a week’s time but now the government has pushed further the deadline to 1st March 2021 after realizing that 1.8 million Kenyans living in the diaspora are yet to get the e-passport.

The government is urging all Kenyans in or out of the country to take advantage of the extension and apply for the e-passport before the queues start jamming all over again. 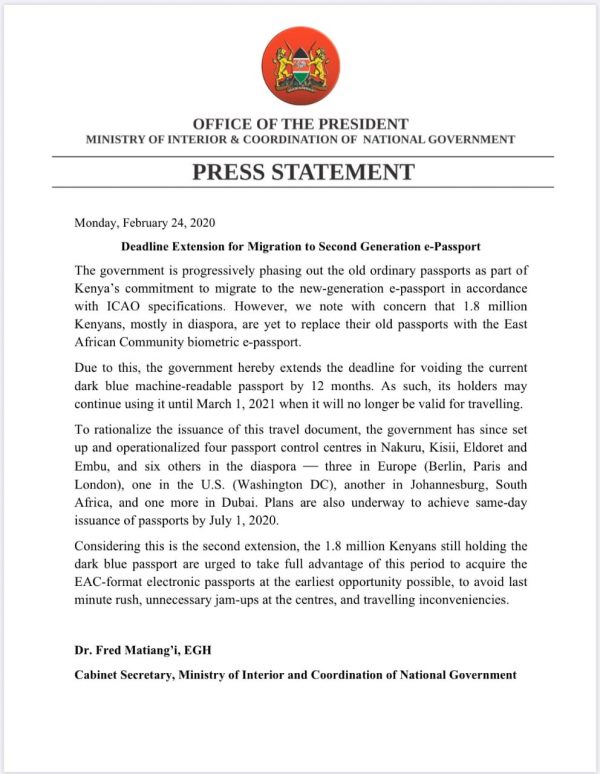 President Uhuru, upon the start of the exercise, directed the Cabinet Secretaries for the ministries of Foreign Affairs under Monica Juma and Interior and Co-ordination of National Government Fred Matiang’ i to coordinate and ensure issuance of passports to all Kenyans.

The e-passport, unlike the old passport, is enhanced with an Automated Fingerprint Verification System to minimize fraud, forgery, passport skimming, and identity theft.

On August 31, 2017, the government rolled out the new generation Kenyan e-passport that is to replace the old ones currently in circulation.

The application is now online

The colors from navy blue to sky blue

How to apply for the new passport:

After payment, you will be able to schedule an appointment at Nyayo house on that day print the filled application form there is a section for your referee to sign and your signature also, get three passport photos, print the government invoice, a photocopy of your identification card, birth certificate, and referees identification card and for the parents if available. Also, carry your original documents.

Things that they do not tell you the passport photos you carry have to show your ears, on that day as a man make sure you wear a collared shirt, a lady do not show cleavage wear something official they tell you to go back home. Make sure you go on the date and time of the appointment.

One thing I observed and was also a victim of was earrings when the official picture is being taken you are not allowed to wear earrings on ears, nose anywhere around your face are not allowed there were a lot of ladies who had to start removing earrings including me, Hair that is coming towards your face like fringes are not allowed either one lady had to remove her wig.

Also, your birth certificate is just for proof they no longer remain with it, after you take photos and your biometrics are taken  Instantly you get a message notifying you that your application is being processed and you leave

It’s supposed to take eight days for new passports and three for renewals but in reality, it takes about two weeks and renewals one week.

Centers that issue passports in Kenya

Read Also Passports To Be Invalid In 10 Days: Visit E-Citizen To Apply For E-passport