Top 10 Money Market Funds In Kenya As Of August 20

In the money markets, 3-month bank placements ended the week at 7.7 percent, while the yield on the 91-day T-bill increased by 7.2 bps to 6.6 percent.

In the money markets, 3-month bank placements ended the week at 7.7 percent, while the yield on the 91-day T-bill increased by 7.2 bps to 6.6 percent.

The average yield of the Top 5 Money Market Funds remained unchanged at 9.8 percent, similar to what was recorded the previous week.

At the same time, the yield on the Cytonn Money Market Fund increased by 0.2 percentage points to 10.7 percent, from 10.5 percent recorded last week.

Here are the top money market funds in Kenya: 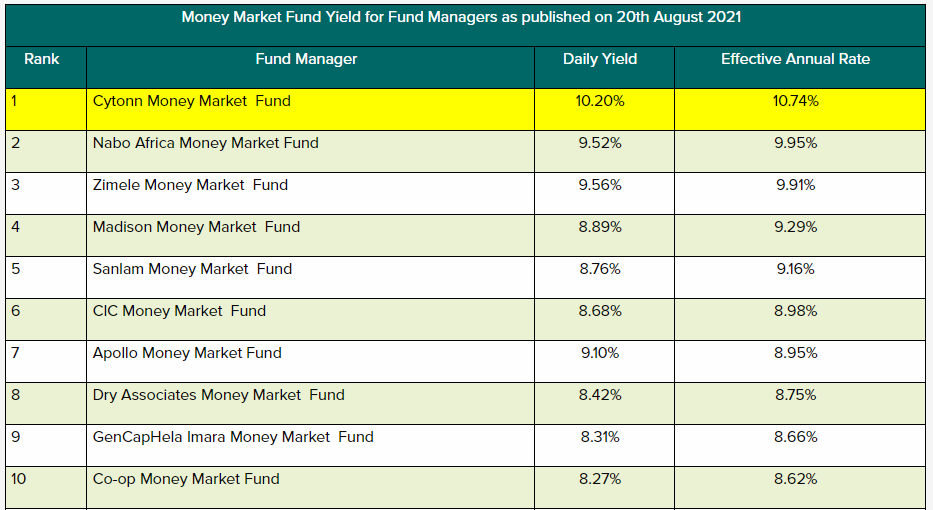 During the week, liquidity in the money markets tightened, with the average interbank rate increasing marginally by 0.1 percentage points to 2.9 percent from 2.8 percent recorded the previous week.

This was partly attributable to settlements of government securities, including the three primary bonds that closed during the previous week and the beginning of the monthly CRR cycle.