What Should You Expect In NBA Starting April 1?

The Nuggets will look to Nikola Jokic to continue his fine recent form, with the Serbian undoubtedly regarded as Denver's game-breaker. 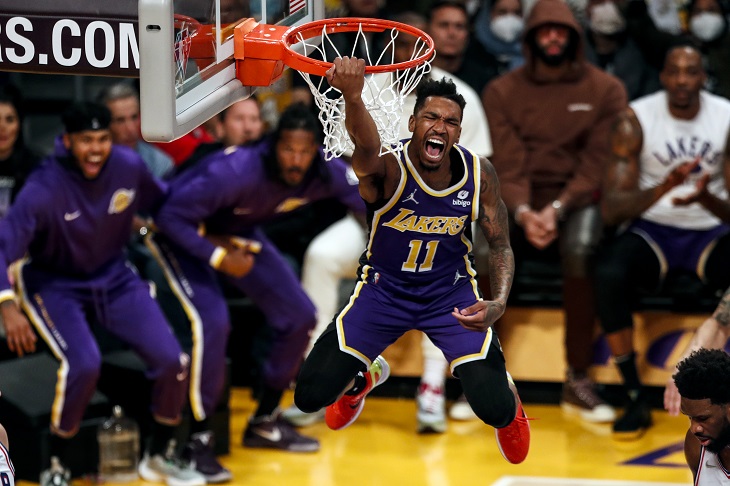 Los Angeles Lakers guard Malik Monk reacts as he scores during the first quarter of the NBA basketball game between the Los Angeles Lakers and the Philadelphia 76ers at the Crypto.com Arena in Los Angeles, California, USA, 23 March 2022. EPA/ETIENNE LAURENT SHUTTERSTOCK OUT

The first of two live NBA Regular Season games on ESPN this weekend arrives on the morning of Saturday 2 April, as the Los Angeles Lakers play host to the New Orleans Pelicans at the Crypto.com Arena (04:30 LIVE on ESPN 2).

Viewers on DStv and GOtv can look forward to thrills and spills from the world’s best basketball league, with ESPN and ESPN 2 the premier venues for coverage of the National Basketball Association (NBA). The 2021-22 season will continue through the week of  Friday 1 to Thursday 7 April 2022.

The first of two live NBA Regular Season games on ESPN this weekend arrives on the morning of Saturday 2 April, as the Los Angeles Lakers play host to the New Orleans Pelicans at the Crypto.com Arena (04:30 LIVE on ESPN 2).

The Lakers will be hoping key man Anthony Davis returns from a serious foot sprain he suffered in February. “I’m very optimistic about it,” Davis explained. “I’m trying to get back on the court as soon as possible. As far as a number or something, I would love to say 100 but with only a certain amount of games yet, not 100 percent sure.”

Davis added, “When it first happened, I heard the crunching, like everything in my foot,” Davis said. “And the first thing I heard, when I looked up and I just saw either Royce O’Neale or Donovan Mitchell turn around [and say], like, ‘Oh s—.’ And when I looked down, and I couldn’t move my foot, my first thought was, ‘Please let it not be broken.'”

The Pelicans, meanwhile, will look to continue the teamwork that has seen them grow as a force in recent times. “The ball finds energy and he had great energy tonight,” Pelicans coach Willie Green said after a thumping win over the Houston Rockets in March. “Everybody who played came in and played with purpose. Just beautiful basketball to watch when we do it together like that.”

The second live Regular Season game sees the Lakers in home action again, this time on the evening of Sunday 3 April when the Denver Nuggets visit the ‘City of Angels’ (21:30 LIVE on ESPN).

The Nuggets will look to Nikola Jokic to continue his fine recent form, with the Serbian undoubtedly regarded as Denver’s game-breaker.

“It was rolling,” Jokic said of a superb recent showing against the Toronto Raptors. “As long as we win the game, that’s what I’m about. Kudos to those guys, they came in high intensity, they played hard and they won the game for us.”