Deadline For Phasing Out The Old Generation Passports Unveiled

The Government had previously set a deadline of December 31 last year for the phasing out of the old generation passport, a move that generated fears among Kenyans who had not replaced their passports.

Kenyans have until November 30 to replace their old passports with the new e-passport following a decision by the council of the East African Community (EAC) member states held in Arusha from November 22 and 29, 2021.

“In line with this decision, the Directorate of Immigration Services wishes to inform the general public that Kenya is bound to migrate fully to the new East African Community biometric e-passport by 30th November 2022.” Director General of Immigration services Alexander Muteshi said in a statement.

Muteshi has called upon all Kenyans to cooperate to avoid inconveniences. Unlike the ordinary passport, the new digitized passport has a contactless microprocessor and enhanced automated Fingerprint that can be used to authenticate the identity of the passport holder. This will help minimize fraud, identity theft, and forgery among other vices.

In addition, the e-passport will assist Kenyans in easing travel, especially through the use of automated border clearances or e-gates, automated issuance of boarding passes, and faster travel arrangements with airlines and immigration checks worldwide. 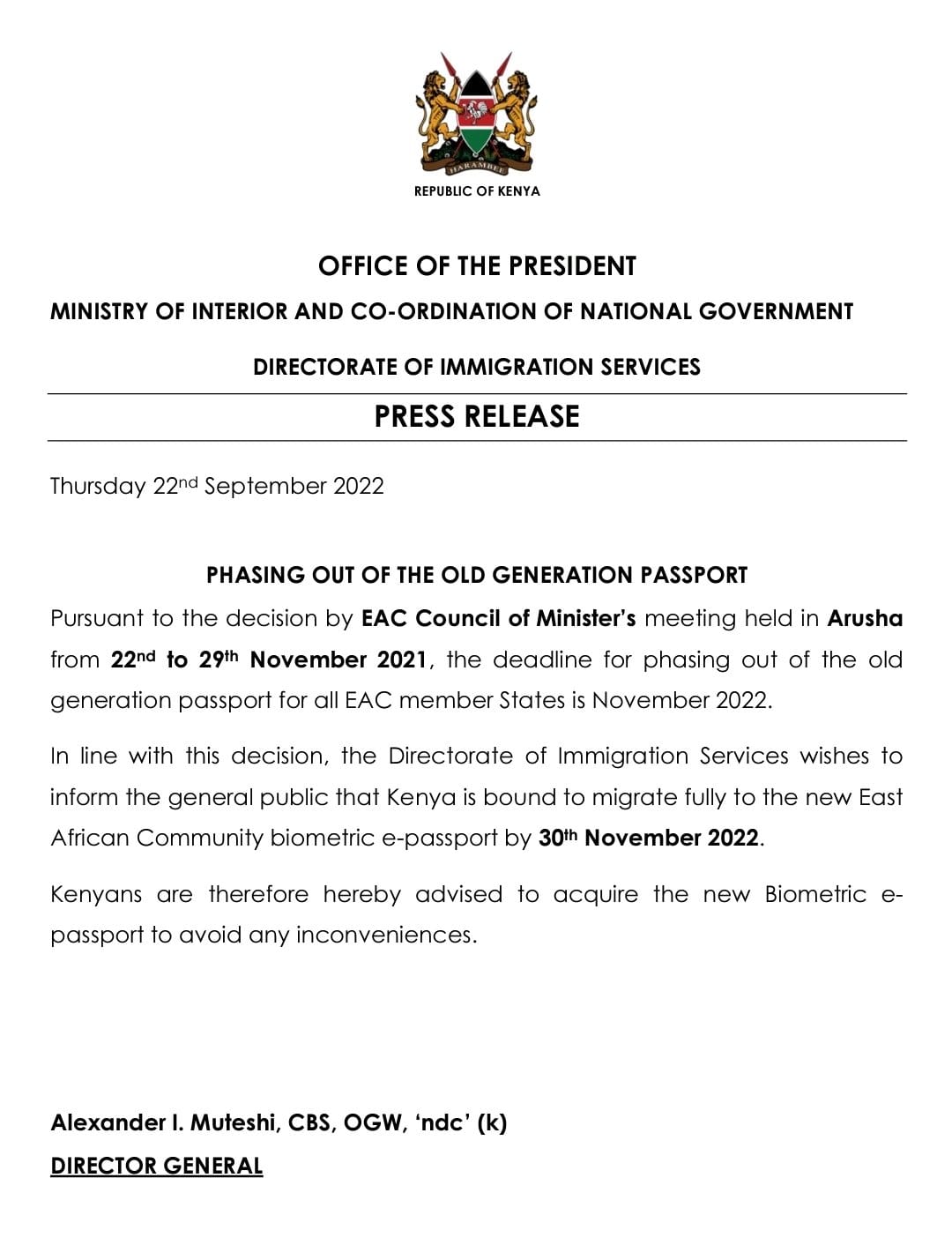 These passports were introduced in 2017 as part of a government move to improve efficiency and enhance security through e-systems.

Last year the government also announced a shift to e-visa services. The department of immigration said it has put in place a system for online application, payment, and issuance of e-visa for visitors coming to Kenya a move that would significantly streamline the processing and issuance of visas for foreigners.

The Government had previously set a deadline of December 31 last year for the phasing out of the old generation passport, a move that generated fears among Kenyans who had not replaced their passports.

To get the e-passport, applicants will be required to apply for a replacement passport and return their current ones. The new EAC passports come in red, green, and sky blue —the colors of the EAC flag — but with text and national emblems.

Related Content: Top 10 Most Powerful Passports In The World