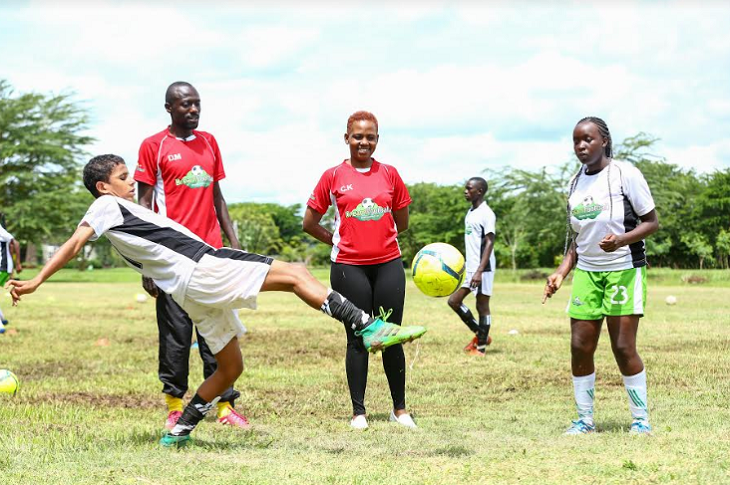 Upfield, manufacturers of the Blue Band spread and the nutritional sponsors of Dream Football Kenya is set to fly fourteen (14) Kenyan budding football stars for a boot camp in Lisbon, Portugal in April 2020.

Early this year, the Dream Football team embarked on a scouting process across the country that has seen the selection of forty-four (44) children to join a 10-day boot-camp.

The camp will take place at Ol Donyo Sapuk Resort from 25th November to 5th December 2019 and will determine the final fourteen (14) who will travel to Portugal at the Figo academy in Lisbon for further training.

The theme for the year, ‘Train like a star with the stars’ seeks to train the children with the best footballers on a move meant to inspire them to be the next soccer stars.

Kenyan football legends such as Ghost Mulee, Musa Otieno and Stanley Okumbi will be present to train and mentor the students in order to prepare them for the European boot camp.

Dream Football Kenya which is undersigned by Dream Football Portugal and co-owned by Luis Figo seeks to make the next generation of international football players aged between 4 – 16 years old.

This has been achieved through school football tournaments which is part of the Kenya Primary School Sports Association (KPSSA), under the Ministry of Education.

Luis Figo is a talented footballer who played for both Spanish giants Barcelona FC and Real Madrid FC. He was also the winner of the Ballon D’Or in the year 2000.

Speaking during the event, Christine Karimi, Dream Football Kenya, CEO, said “We have traveled across the country in a bid to identify talented children that will one day make history in the sports industry both locally and internationally. It has been a successful journey and we have been able to groom the budding stars with skills that will assist them in achieving their dreams.”

At the boot camp, the children will undergo a 360⁰ experience that will cover nutrition, physical fitness, education, and life skills. As the sponsors, Blue Band has actively created awareness on the importance of a good breakfast by providing breakfast to the players throughout the tournaments and this will extend during the 10-day training.

“It is such an honor to witness the outcome of the partnership we have with Dream Football Kenya. The forty-four (44) youngsters are true examples of what hard work and resilience are in achieving greatness. Blue Band joined this initiative as the Nutrition partner, by offering a good breakfast to the children to ensure that they have the energy to play. The brand has been pushing the ‘good breakfast’ agenda with the target to reach 2 million children this year,” Njonjo Wanjiku, Upfield Marketing Manager, said.

The Dream Football agency is present in 5 countries with over 75 children having been scouted into various clubs in La Liga.