The construction sector comfortably maintains 1.7x GDP growth and accounts for 5.1% of GDP, while the Real Estate sector records growth at 0.8x GDP (7.9% of GDP). We expect ongoing transport infrastructure projects, coupled with a sustainable urban growth rate of about 4.0% to improve accessibility and transport
connectivity within Nairobi and rapidly growing towns, notably Mombasa, Kisumu, Nakuru and Eldoret.

Using approved plans as a basis of assessing property supply, we estimate a 3-year Compounded Annual Growth Rate (CAGR) of 9.6% of the aggregate value of approved buildings in 2015. An uptick in the number of approvals sought and building permits issued between 1Q15 and 3Q15 was noted, following the reduction of building permit fees to 0.5% of total construction costs, from a range of 1.0%-1.5%.

Residential building approvals have also recorded rapid growth with a 3-year CAGR estimate of 32.5%, partly attributed to City Hall’s recognition of share certificates as proof of land ownership in 2014. As at September 2015, the number of permits released in 3Q15 were 722 (+10.4% y/y).

The real estate sector growth and private sector construction activity assumes a negative correlation with interest rates (-23.6%) and currency depreciation (-15.9%), suggesting sensitivity of the sectors is present, albeit lower than would be expected. This may be an indication of high reliance on equity capital in real estate, particularly in the residential property space. 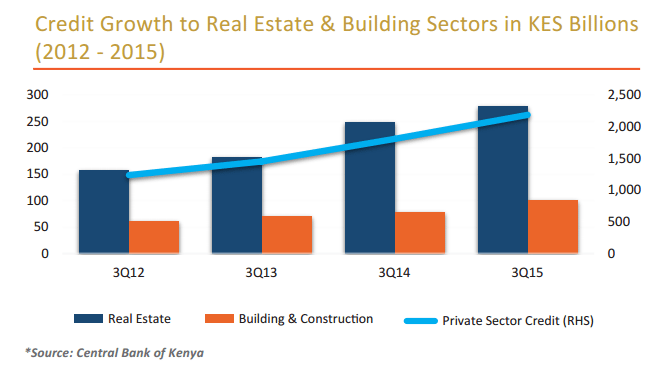 Additionally, despite the lending rates remaining relatively high between 2013 and 2015, ranging between 15.3% in August 2013 and 18.1% in December 2015, Non-Performing Loans (NPLs) attributable to construction and real estate sectors were reported to generally remain constant during the 3 year period, against an annual average NPL ratio increase of 19bps over the 3 years to 4.3% in 3Q15. 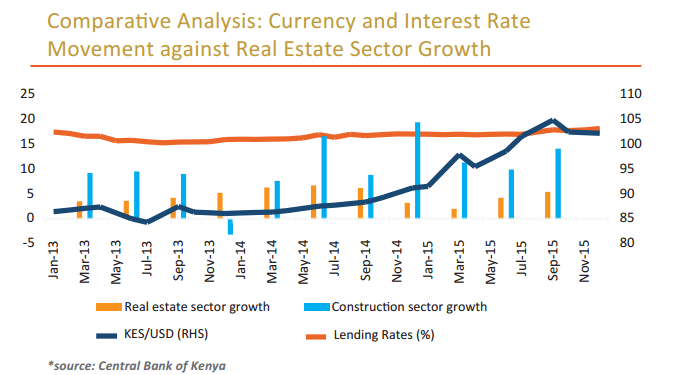 2016 will see the highest ever delivery of new offices with an estimated 3.8 million Ft² expected to come on stream, beating the previously all-time high of 2.3m Ft² in 2011.

Waiyaki Way and Westlands remain the premier locations for many tenants, recording take up levels of 81% and 62% respectively for new office space delivered in 2015. 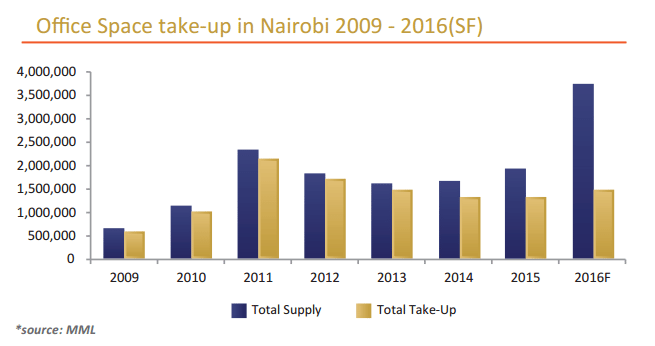 There was a slowdown in the growth of commercial office rental rates, with average asking rents increasing by 7% in 2014-2015. This is significantly lower than the 13% increase recorded in 2013-2014. 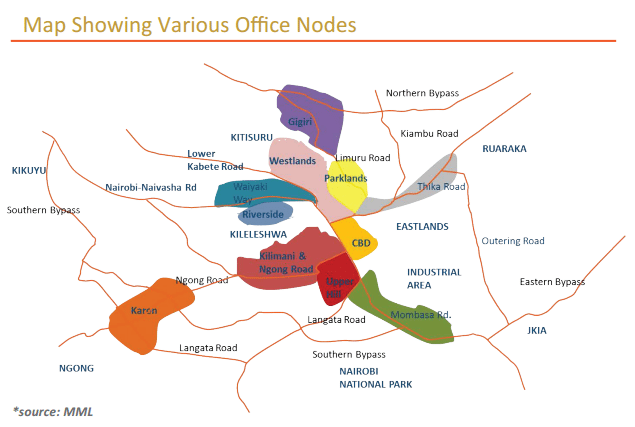 Nairobi will have an estimated 4.9 million square feet of shopping centre space by 2017F with two large malls due to open later in 2016 (Two Rivers and
Rosslyn Riviera) following the opening of Garden City in September 2015 and The Hub in February 2016.

Current occupancy rate in existing shopping centres is 90% with retail space mainly concentrated in the Westlands area which accounts for 20% of existing retail space.

In spite of continued expansion by supermarket operators such as Carrefour, Naivas and Chandarana (Food Plus) there is general perception of a slowdown in the retail market with several operators reporting reduced sales since mid-2015. 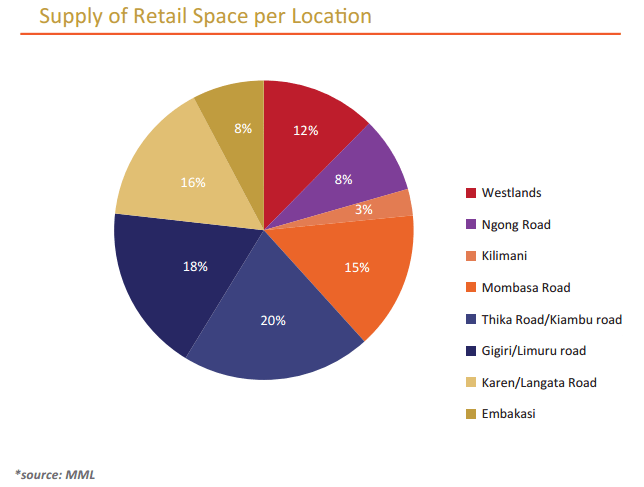 High levels of space hitting the market in 2016, combined with bearish retailer sentiment, will lead to reduction of space being delivered in 2017/2018. 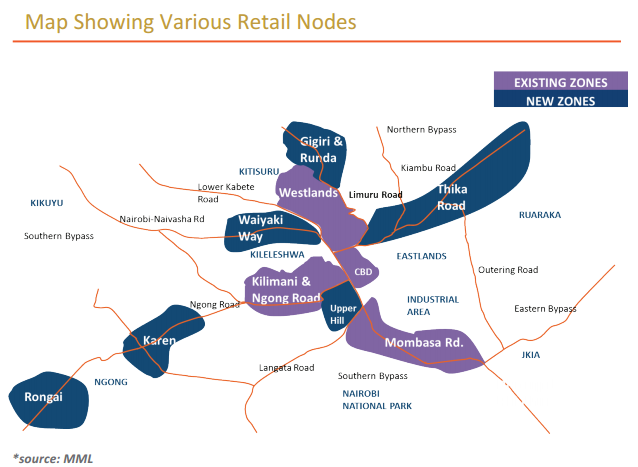 This sub-sector still experiences a lower supply due to the high interest rates of 15%. Supply of approximately 5,000 apartments is expected in 2016 compared to just 1,700 units in 2015.

Innovative property acquisition methods such as the Tenant Purchase Schemes/Agreements have been sought by developers like the National Housing Corporation (NHC), which has provided Kenyans a more affordable alternative to acquiring housing. 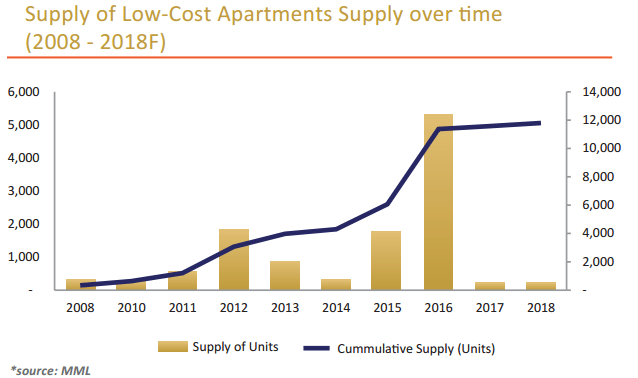 High-end residential units in many areas are experiencing reducing rental levels and there is relatively high vacancy of Grade B stock.

The major target market for these properties has been the expatriate community and local high level management. The demand of these units witnessed a slight decline in the last year and a half mainly attributed to the downsizing of diplomatic missions and a gradual reduction in expatriate families as a result of security concerns.

According to The Knight Frank Prime Global Cities Index, Nairobi Prices in Q3 2015 increased by 3.5% in the 12 months to September. On a six-month basis, asking prices went up 1.1%, while a 0.2% increase was recorded for the three months to September.

Sale prices of high-end apartments range from KES 30m to KES 50m with average monthly rental rates ranging from KES110,000 to KES 230,000 per month. However, lower density apartments that are well-appointed in prime locations tend to fetch higher rentals of above KES 270,000 per month.

Sale prices for townhouses in gated communities range from approximately KES 55m to KES 100m with average monthly rents of approximately KES 270,000 to KES 420,000 per month. The few units that fetch rentals of above KES 420,000 are of the highest quality and generally are situated in the Muthaiga, Nyari and Lower Kabete areas.

The serviced apartment market in Nairobi has been developing over time with a total supply of approximately 2,100 units in 2015 increased from only around 1,000 units by 2003.

Upper Hill, despite growing into a significant office hub, has lagged in supply of serviced apartments due to limited supply of social amenities. 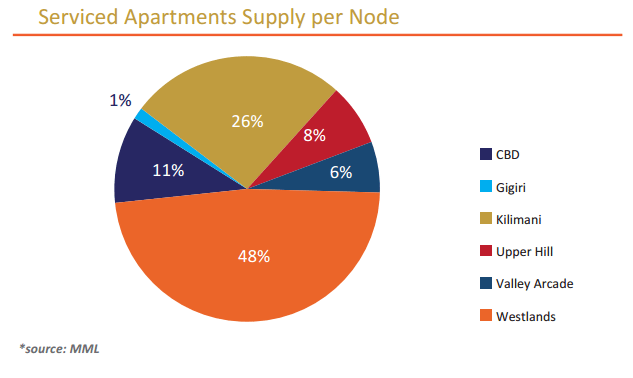 City-wide occupancies for serviced apartments in Nairobi stand at approximately 85%. This is a drop from last year’s occupancy levels which stood at 92% which can be attributed to a drop in international arrivals and a general malaise in the oil industry as a result of lower oil prices and suspended drilling activities in Northern Kenya. 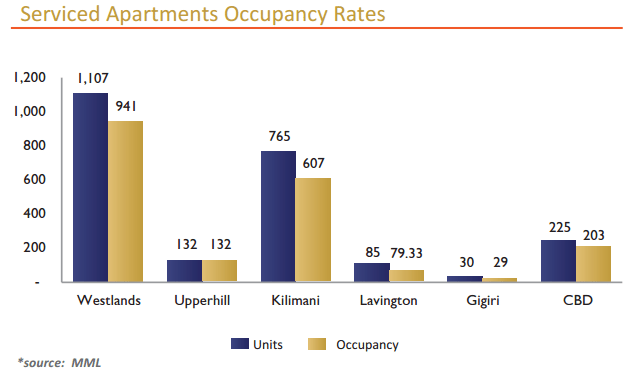 Land prices in Nairobi across the various sectors continue to appreciate over time. This is mainly attributed to the finished and ongoing infrastructural developments, improved planning regulations on densities and generally the scarcity of development land. 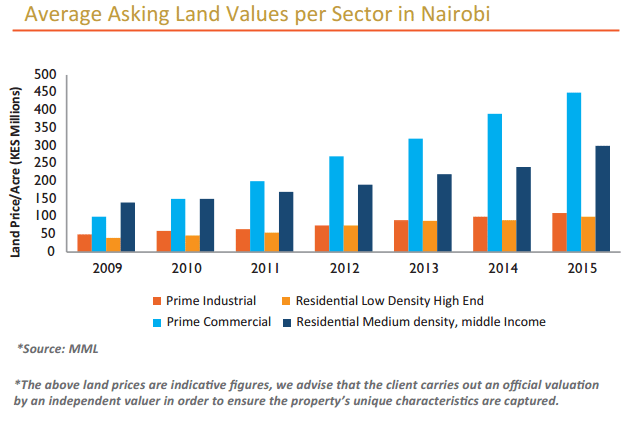 Prime commercial land takes the lead with an average land price of KES 450m in 2015 compared to KES 390m per acre in 2014. There are even a few examples of plots achieving in excess of KES 450m per acre especially along Waiyaki Way and some parts in Upper Hill. 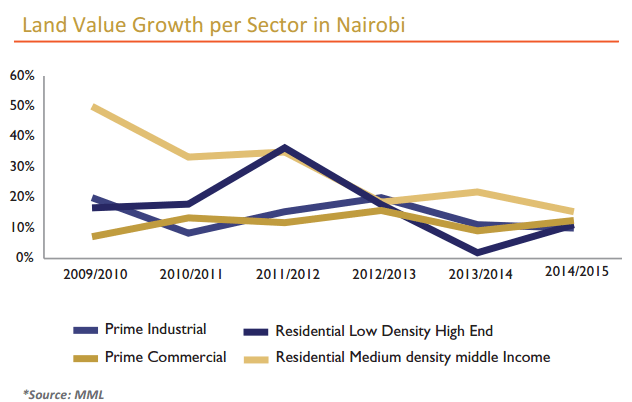 2014/2015 registered an average price growth rate of 12% across the sectors compared to 11% in 2013/2014 with commercial land growth taking the lead at 15% followed by middle income medium density residential land.

The expansion of Nairobi’s Ngong Road into a dual carriageway was set to start in April following the award of the Sh1.3bn contract to a Japanese firm in first quarter 2016.

The expansion of the 13 Km Outer Ring Road, costing KES 14bn by both the Government of Kenya and the African Development Bank is expected to be completed in Q4 2017.

A major proposed road work is the Likoni – James Gichuru Road project. The project will be funded by credits from the International Development Association thus construction is expected to commence in 2017 and to be completed within a span of 3-5 years.

The pending completion of the Southern By-pass is expected to have a positive impact on the Mombasa Road real estate market as traffic congestion is expected to ease in the area.

The Construction of the USD 3.8bn Standard Gauge Railway (SGR) connecting Nairobi to Mombasa is underway with circa 60% completed, 90% of the project’s cost is being funded by Export-Import Bank of China (Exim) and expected to be completed by 2017.

Japan committed USD 500m for the future development of the Mombasa Port, close to half of which is already allocated as a loan for development of its second phase. Japan International Cooperation Agency (JICA) committed to provide a Japanese Official Development Assistance (ODA) Loan of approximately KES 24bn for Mombasa Port Development Project Phase 2.

Nairobi has witnessed sustained growth since 2002. Today it has a vibrant securities market, a well-developed banking and insurance sector and is home to a growing number of international firms and investors seeking a foothold in this relatively stable and well-connected regional hub. There is increasing over-supply in several areas of the Nairobi commercial and residential real estate market. Apartments, offices and malls may well experience higher levels of vacancy during 2016 as supply continues to outstrip demand. Barring any external shocks, higher interest rates and developers responding to market dynamics we predict a rebalancing of the market in the medium term.

Successful developments going forward will respond to occupiers’ growing demand for quality. These will lease well and sell at a premium to the growing number of investors targeting the Nairobi market. Developers and investors, who do their research and create the right product in the right location, will still
be able to generate healthy development profits in most real estate sectors.

Click here to read the report by MML Developments.