Investment in Focus: The Evolving Information Technology in Kenya

The technological world is ever changing. The wind of change is ever sweeping across the globe. The train already left the station and those not already on board are never likely to catch up. Kenya has not been left behind in terms of the Information Technology revolution.

Information Technology is one of the key sectors in the economic development of any given country. According to International Trade Centre, Kenya had a total of 12 million internet users in the year 2018 with the urban internet penetration standing at 78 percent, mobile penetration at 72 percent and 31 percent of all mobile phones in the urban areas being smartphones.

Internet Live Stats, on the other hand gives a more broad insight on how the IT sector is evolving in Kenya. According to them, Kenya has 21,248,977 internet users by the year 2016 and the number is still growing. This penetration in terms of internet takes 45 percent of the share of Kenya’s total population. According to the stats, Kenya contributes 0.6 percent share to the world internet user. Internet users in the world currently are at 3,424,971,237.

The table below shows how internet users have been growing in Kenya since 2003:

From the table above, the number of internet users has been increasing tremendously over the years.

The line graph below shows how internet penetration has been in Kenya since 2003: The image below shows the percentage change of the Kenyan population since the year 2003: 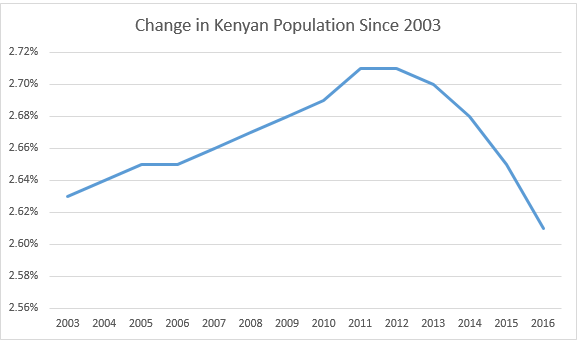 What are some of the sectors that one can invest in in the IT sector in Kenya?

The following are some of the opportunities available in the IT sector in Kenya that are yet to be fully exploited:

The following are Investment opportunities within the sector