Rise in Food Prices Pushes Inflation to 6.34 pc in September

Kenya’s inflation has gradually risen to 6.34 percent in September compared to August’s 6.26 percent according to the Kenya National Bureau of Statistics.

In a statement, KNBS said that on a month-on-month basis, inflation was at 0.34 percent. Rising food prices outweighed consumer gains from falling fuel prices, it said.

“Between August and September 2016, Food and Non-Alcoholic Drinks’ Index increased by 0.55 per cent. This was attributed to increase in prices of several food Kenya National Bureau of Statistics items which outweighed the decreases. The year on year food inflation stood at 10.94 per cent in September 2016.”

The data on the prices were obtained from selected retail outlets in 25 data collection zones. Ten (10) of these zones are located in Nairobi and the rest in 13 other urban centers. 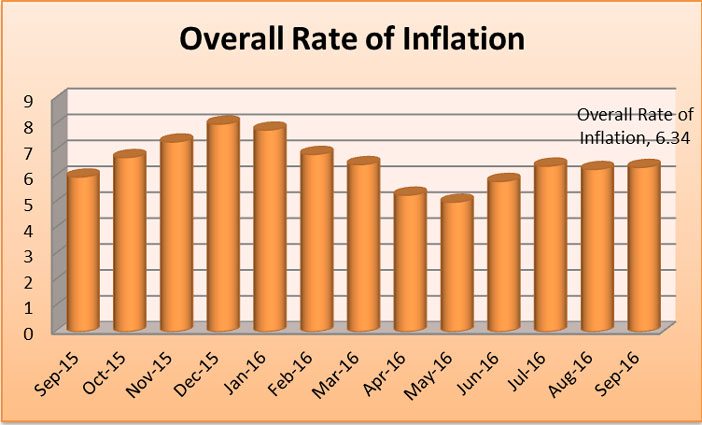 Over the same review period, Housing, Water, Electricity, Gas and Other Fuels’ Index, increased by 0.05 per cent. As indicated in Table 3, although the cost of electricity remained the same as in the previous month, that of kerosene and cooking gas decreased by 5.3 and 2.4 per cent respectively.

The Transport Index decreased by 0.30 per cent in September 2016 compared to August 2016 mainly on account of decreases in the pump prices of petrol and diesel.