Short Rains Expected Across the Country in the Coming Months 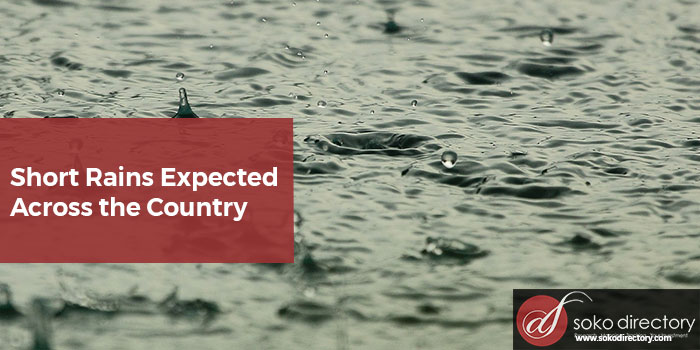 Short rains are expected to be experienced for the coming months of October, November, and December according to the Kenya Meteorological Department.

In an update on the climate outlook for the coming months, the Kenya Meteorological Department noted that the distribution of the rainfall in time and space is expected to be generally good over most places especially during October and the peak month of November.

“This constitutes a positive Indian Ocean Dipole (IOD) that is favorable for good rainfall over much of East Africa,” read the update on the weatherman’s website.

However, the department said that generally dry conditions are likely to prevail over much of the country for most of December.

Most parts of the country experienced below-normal rainfall that was mainly recorded in April and May 2017. A few stations in southeastern Kenya, and the Coastal strip recorded above-normal (enhanced) rainfall (more than 125 percent of their seasonal Long-Term Means (LTMs) for March-April-May.

The distribution, both in time and space, was generally poor over most parts of the country including the western and central regions including the areas that recorded above normal rainfall.

The seasonal rainfall onset was very late over the entire country with most areas remaining sunny and dry throughout the month of March 2017.

In the months of June, July and August, most parts of the country experienced generally sunny and dry weather conditions.