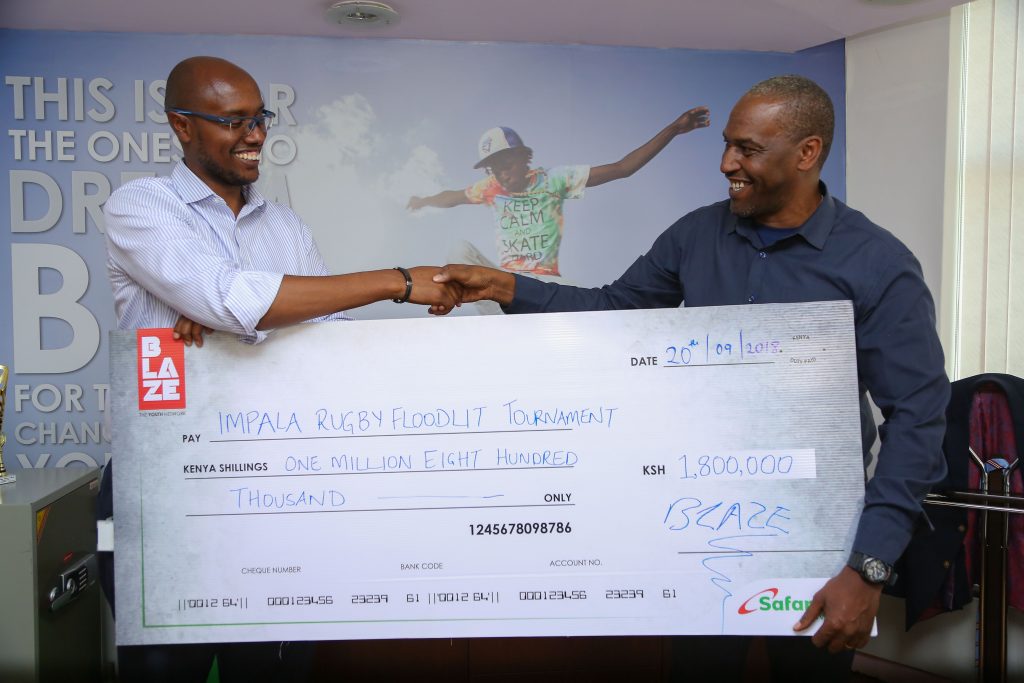 BLAZE, Safaricom’s youth network, has sponsored the Impala Floodlit Rugby Tournament with 1.8 million shillings for the third year in a row.

The 1.8 million shillings title sponsorship will see BLAZE earn naming rights to the tournament, which will be held at the Impala Grounds in Nairobi on 13th, 20th and 27th October 2018.

Impala Floodies brought to you by BLAZE is in line with the brand’s commitment to empowering young Kenyans by investing in youth-facing initiatives, as it seeks to support those looking to build successful careers in sports, media, performing and visual arts, design, and other careers considered unconventional.

“We see great potential in the youth that is just waiting to be tapped. Sponsoring Floodies not only elevates the sport by providing financial and non-monetary assistance, but it also provides valuable opportunities for young players to showcase their skills, passion, and grit,” said Interim Director for Consumer Business, Safaricom, Charles Wanjohi.

The sponsorship complements BLAZE’s ongoing thematic campaign, G.R.I.T., which stands for Greatness Requires Internal Toughness. The campaign aims to encourage the youth not to give up on their dreams no matter what obstacles they face and features individuals who are excelling in unconventional fields such as dance, skateboarding, and Muay Thai.

“Rugby is associated with strength, speed, strategy, and toughness, making it an ideal fit for sponsorship by BLAZE. Over the years, Floodies has become a highlight of the school rugby calendar, and a pre-season tournament that teams use to prepare and feed into the Kenya Cup league and the national squad. This year, we expect to see 8 Kenya Cup Teams, 8 universities, 8 secondary schools and 6 women’s teams participating in the tournament, including defending champions KCB and 1st runners-up Impala Saracens,” said the Chairman Impala Saracen Rugby Club, Bill Githinji.

The 36-year-old 15-aside tournament last year attracted over 3,000 fans and will this year courtesy of BLAZE feature exciting prizes in the club and school categories, including Most Valuable Player, Most Promising Player, Top Try Scorer, Top Points Scorer and Man of the Match Awards.

The BLAZE sponsorship includes 1 million shillings in cash and an additional 800,000 shillings in airtime, prizes and the provision of a fully-kitted media center.

BLAZE is a sub-brand of Safaricom that was launched in 2016 to give youth aged 26 years and below products, services, and benefits tailored specifically to meet their everyday needs.  A first of its kind platform in Kenya, East, and Central Africa, BLAZE was founded on what Kenyan youth say is most important to them: freedom, empowerment, and success.