How the Kenyan Budget has been Growing for the Last 20 Years: The Language of Numbers

A week ago, the Cabinet Secretary for National Treasury, Henry Rotich presented to the nation the 2016/2017 financial year National Budget. The budget was at an estimate of 2.3 trillion shillings. This budget was said to be the most expensive and the most ambitious budget in the history of the country with a budget deficit of more than 700 billion shillings. This means that for the government to sustain the budget, borrowing of more than 700 billion shillings is necessary. This led to some Kenyans including the media taking to the social media calling it the budget that was only to thrive on the wheels of debt putting in mind that it is higher than that of Uganda, Tanzania, Rwanda and Burundi.

A lot of information has been written on the national budgets in Kenya. However, no single individual has taken time to look back and analyse how the Kenyan budget has been growing each coming year and the factors that have been contributing to this growth. So, how has the Kenyan budget been growing for the last 20 years? What are some of the factors that have contributed to this growth? What is the way forward to the Kenyan economy with the rising budget?

The financial year 2011/2012 is what marked the beginning of the Kenyan budget in terms of trillions for before that, the budget was only in billions.

The table below shows how the budget of Kenya has been growing in numbers: (The table however shows the change for the last ten years from the financial year 2016/2017 to 2008/2007)

The line graph below simplifies how the Kenyan budget has been rising for the last ten years in trillions. 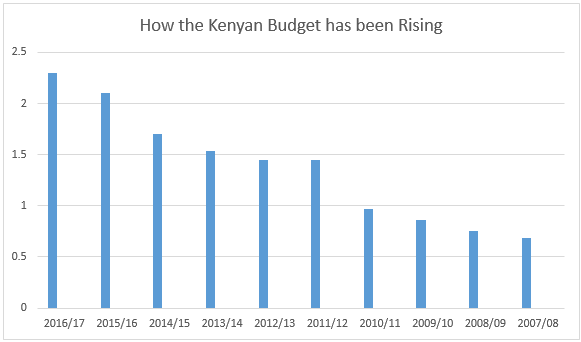 See the graph bar below for a view on how Kenya’s spending has been rising (in trillions): 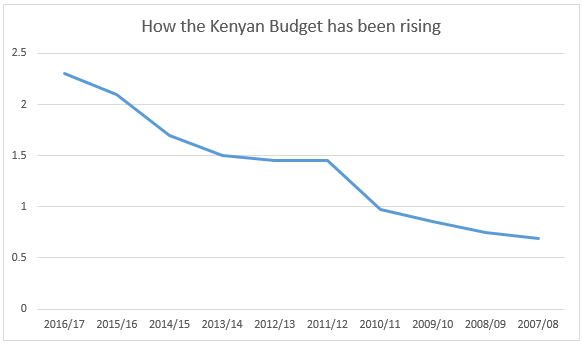 Each coming year, the Kenyan budget has been rising. Some people have projected that there shall come a time when the budget will be too expensive for the nation to maintain and sustain. Economists including the International Monetary Fund, IMF, have already issued a red flag concerning the country’s borrowing spree with at some point being estimated that every Kenyan owed the world at least 75,000 shillings. (Though the Cabinet Secretary for National Treasury said that Kenya is still with the debt threshold set by the World Bank and the IMF.)

Factors for the rising of the Kenya’s Budget

Ideally, the budget for any given country has to rise. There is no nation in the world whose budget has gone down each year a financial budget is read and Kenya is no exception. However, what matters most are the reasons why the budget keeps on rising. Is if for the benefit of the common man on the ground? Is it for the sustenance of the status quo?

Kenya spends a lot on infrastructure. Kenya’s infrastructural sector has been growing over the years with the challenging being upgrading from the archaic infrastructure to modern ones. These efforts have seen the coming into being of such infrastructures as Thika Super Highway, the Standard Gauge Railway as well as the upgrading of airports across the country.

Kenya’s new constitution contributed immensely in the rising of the Kenyan budget. The constitution created devolution. The 47 counties around the country, apart from the revenue that they generate on their own, most of the financing comes from the National Government. Free Primary Education program that was started by the Mwai Kibaki government also has an impact on the Kenyan budget. The government foots the bill for all the pupils in public primary schools in the country with the current one being the government paying examination fees for both class eight and form four candidates.

Did you know that corruption has a great impact on the economy of this country? Well, one of the factors that have led to the rising of the Kenyan budget is corruption. According to PKF East Africa, 50 percent of the Kenya’s budget is lost due to corruption. Corruption continues to be the cancer of Kenya’s economy with the President of the Republic of Kenya declaring it a threat to National Security.