Kenya Airways posted an operating profit of Ksh 0.9 billion for the six months ended in September 2016 from an operating loss of Ksh 2.2 billion in 2015.

The improvement in operating performance was underpinned by growth in cabin factor by 3.3 per cent during the period, with an increase of passenger numbers by 89,000 to 2.2 million and lower operating costs made possible by fleet rationalisation in line with the recovery strategy ‘Operation Pride’. 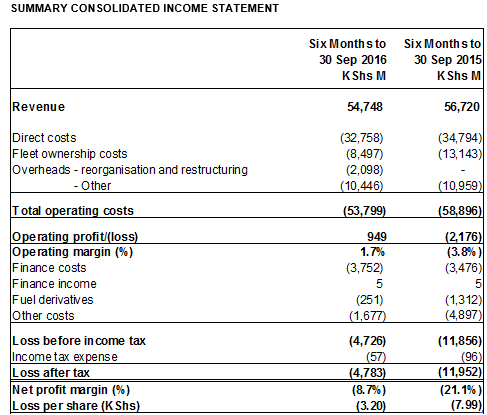 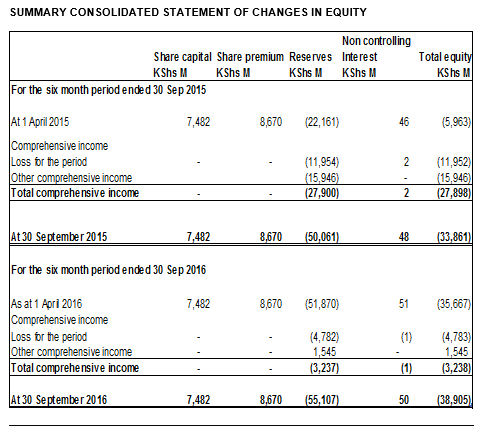 According to Kenya Airways CEO Mbuvi Ngunze, Passenger numbers grew by 4.2 percent to a total of 2.2 million in the first half of FY 2016/2017 and traffic across Africa grew by 14 per cent.“Lower operating costs were made possible by fleet rationalisation in line with the recovery strategy ‘Operation Pride’,”he said on Thursday.

“KQ’s turnaround strategy ‘Operation Pride’ continues to be the main focus of the company,” CFO, Murianki. This entails closing the profitability gap, refocusing the business model as well as optimising the capital of the company.

“One of our key goals of Operation Pride is to improve our results and we are on course. We continue reviewing our operations to ensure we remain competitive in the market. We now operate a leaner but efficient airline,” said Mr Ngunze.
During the period the airline flew nine per cent more hours than the same period last year with seven fewer wide-body aircrafts. The airline reduced its direct operating costs by KShs 2 billion to KShs 32.8 billion mainly driven by fuel prices. Fleet ownership costs reduced by 35 per cent to KShs 8.5 billion.
This includes additional aircraft impairment of KShs 1.8 billion.The reduction in capacity saw revenues drop marginally by 3.5 per cent to KShs 54.7 billion. The airline uplifted less tonnage during the period due to decrease in wide body capacity leading to revenue from cargo decreasing by 20.9 per cent.

Read: Why We Should Not Let Kenya Airways Die