We are to blame for the chronic corruption in Kenya; not Uhuru or the people around him

Carl Sagan in his book, The Demon-Haunted World: Science as a Candle in the Dark illustrates the Kenyan situation perfectly. His words echo the ignored sentiment of what every Kenyan is going through. He said…

“One of the saddest lessons of history is this: If we’ve been bamboozled long enough, we tend to reject any evidence of the bamboozle. We’re no longer interested in finding out the truth. The bamboozle has captured us. It’s simply too painful to acknowledge, even to ourselves, that we’ve been taken. Once you give a charlatan power over you, you almost never get it back.” 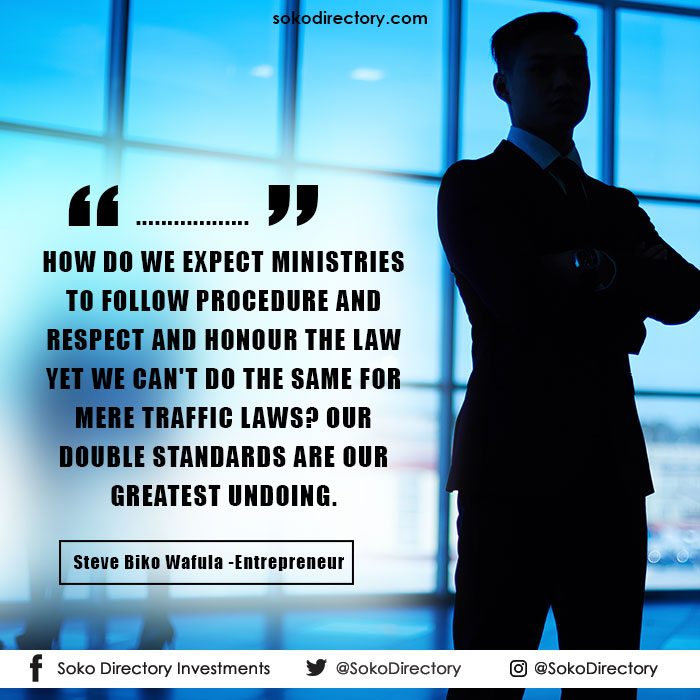 As a people, we have been bamboozled by our leaders, who we elected at the behest of our blood that flows through the essence of tribalism. Allow me to give you three scenarios as to why I agree with Carl Sagan.

Imagine you are in a matatu to town and you are late and the driver is reckless, overlapping and all. What do you do? We normally applaud and encourage them to go on. It’s in our best interest to get to town for that date or get to the office before the boss checks in. We do this oblivious to the danger this behaviour is posing to other road users. We have this mentality; it doesn’t bother me, so I don’t care. As you get to work or to your date, you see on @Ma3Route on twitter that a lady driver was pushed off the road into a ditch and she is badly injured. You shrug it off and move on.

Imagine you’re driving to Naivasha for a weekend out with you girlfriend and because of excitement, you try to impress her with how your new Subaru performs and you get stopped for speeding. Now, you imagine how your weekend was going to be, the drinks, the flirting, the sex. You decided, afande, kula ka thao.… and you move on, still driving reckless to impress the girl…in the process, you scare a learner into a cliff. You don’t stop. You see it on Facebook that a lady driver with L sign died on that road to Enashipai. You shrug it off, continue with your make out session.

You love speed. You decide to buy a BMW bike 1000 CC. The Nairobi traffic is stupid. You use the opposite lane. You ride on the yellow line. Your girlfriend, who is holding onto you tighter than the tights she is wearing has no helmet. You get stopped by cops and since you loving the warmth of your girl, you tell the afande, kula hii Ngiri…. a few moments later, you crush into a stationery truck.

You travel to the land of the Arabs. The beautiful city in the desert. The excitement in you surpasses that of a child with a new toy. Unfortunately, you don’t have a passport. This is an opportunity that some sponsor has blessed you with. He has even told you that you flying first class and some iPhone 7S is awaiting you when you land. With this, you can imagine how urgent and vital it is that you get your passport today.

Notwithstanding that it takes 14 days for a passport to be ready. You go to Nyayo house at 9AM and the queue is long enough to reach your ancestral home and back. You start hissing like some rattle snake. You go to twitter to rant to the department twitter handle. They don’t respond. You call your sponsor. He calls someone. Who calls someone. Who calls you. You are told to go to 9th Floor. Your passport is processed within the hour. You can feel your own orgasms as you leave Nyayo house walking as if you Cleopatra. That day in the KTN prime, you learn of 148 Kenyans who died in a bomb attack because they acquired Kenyan passports illegally. You go online and bitch how immigration is corrupt as you wait for Uber to take you to the airport. 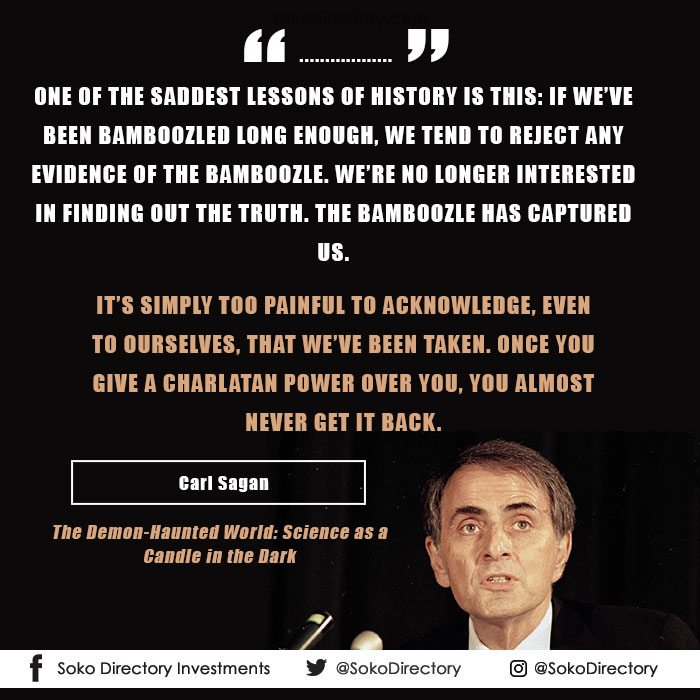 Imagine this first-time MP who spent every single coin on his/her campaign to get to office. They just been nominated to the PAC and they are excited. First order of business is to grill the CS of Health on some tenders concerning Dialysis machines to Level 4 hospitals across the country.

As the grilling goes on the and the issue becomes too hot, the MP is approached and promised a couple of things, amongst them a new house in Runda, a new G Wagon Mercedes-Benz for one thing in return, declare the proceedings pointless and issue a presser stating that no money was lost. The excitement of the MP is beyond description. The enchantment in his voice is evident. In the relative time continuum aspect, people are dying at the counties because there are no dialysis machines and I mean, these are poor folk, they won’t raise any voice or go online and tweet.

The road to your shags needs to be tarmarked. The tenders are done and some village mate of yours wins the tender. Not to mention he has no construction company. He has no prior experience. His only expertise is being the son of the richest man in your village. People complain about this and your entire village demonstrates, saying ‘MTU wetu anachukiwa’ the matter drops. The road is built in a shoddy manner. The rains come, the tarmac is washed away. The design leads to numerous road accidents.

The above scenarios play themselves out in more sectors and areas. From lands to education to security and because it’s always about me, we put our interests first as the common good of the country fades. In no time, those who have manipulate the system to get what they want. Those who don’t do harambees to pay bills and are buried in borrowed coffins.

If law, common sense, reason and honour are not on the same side, which one shall we choose? How shall we live together?

On a weekly basis, I get at least three invites for a medical fundraiser and its always about cancer. Every week hundreds die because of rogue PSVS and corrupt cops but we will fundraise to pay the bills. Every week traffic gets worse because we never respect the basic laws as someone dies in an ambulance because the roads are clogged from over lapping.

Dear Kenyans, if we can’t:

How do you expect the government and its agencies to do anything about corruption when our very actions in different scenarios bless them and vindicate them and encourage them to continue doing what they are doing?

How do we expect the various ministries to follow procedure and respect and honour the law yet we can’t do the same for a mere traffic law? Our double standards are our greatest undoing.

Uhuru knows our weakness. His people know our weakness. They are using our own weakness against us. They are playing Spanish guitar with our lives because they have the permission from our own actions.

Pretend to be livid. We go online and cite quotes with amazing hashtags but the moment we learn it’s our person…we forget why we were angry again.

I know the levels of corruption are too high for Kenya and some must give now before its too late but we both know nothing will happen the inaction of the government has the endorsement of our very actions. We are to blame for the chronic corruption and not Uhuru and his people. 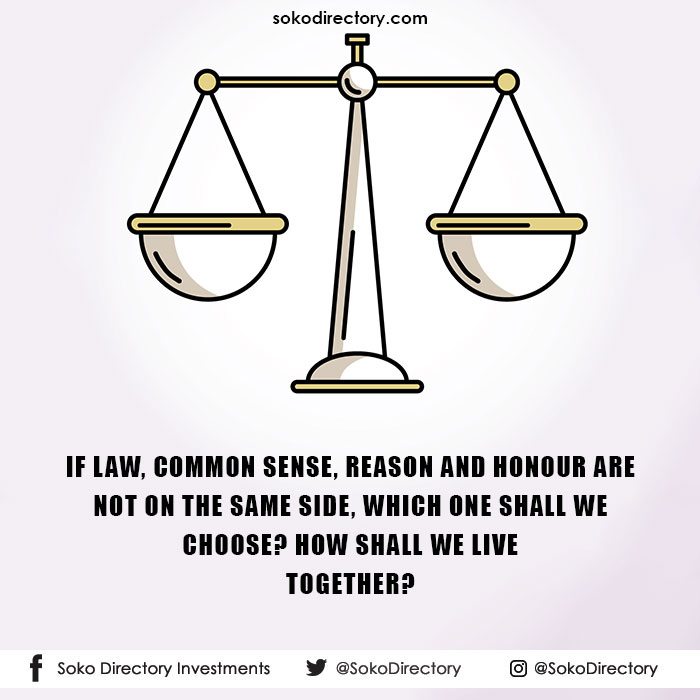 The law on procurement is very clear but our dear DP will stand before a crowd and rubbish that law and he will be cheered and clapped for by everyone who when they visit the nearest hospital for meds, they will be told endeni town!

Our actions bless the actions of the government. If enough is enough, we would all be in the streets. Shame of us!

By the time of going to the press, we had done a twitter poll on who is to blame for the rampant corruption in Kenya and here are the preliminary results: 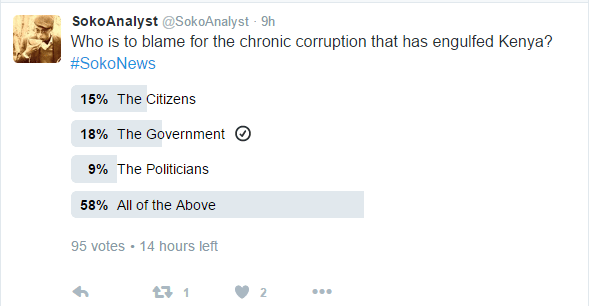