The average interbank rate declined to 3.7 percent from 5.4 percent the previous week according to stats contained in the weekly Cytonn Report.

The interbank rate, which hit a 3-month low at 3.4 percent as at 9th October 2018, points to improved liquidity, which the CBK attributed to government payments.

According to Bloomberg, the yields on the 10-year and 5-year Eurobonds issued in 2014 gained by 0.2 percent points and 0.1 percentage points to 7.3 percent and 4.5 percent from 7.1 percent and 4.4 percent the previous week.

Since the mid-January 2016 peak, yields on the Kenyan Eurobonds have declined by 2.3 percent points and 4.3 percent points for the 5-year and 10-year Eurobonds, respectively, an indication of the relatively stable macroeconomic conditions in the country.

Key to note is that these bonds have 0.7-years and 5.7-years to maturity for the 5-year and 10-year, respectively. 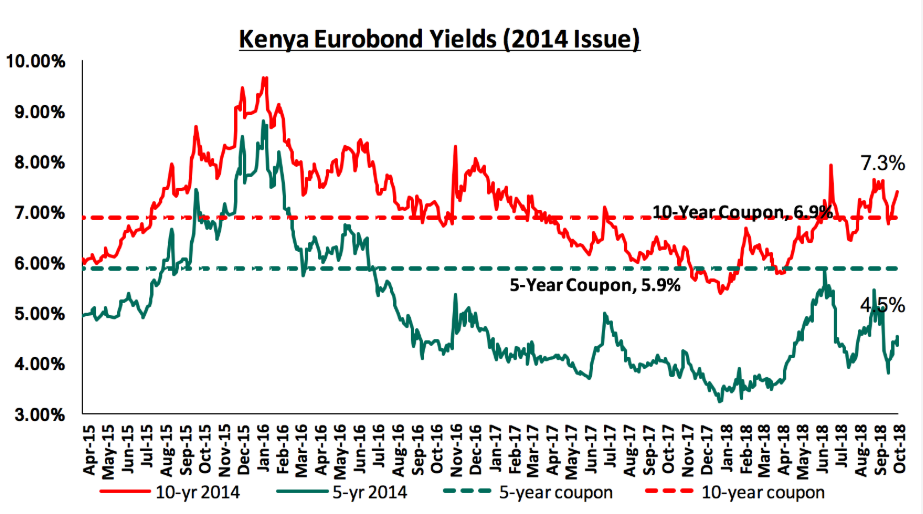 For the February 2018 Eurobond issue, during the week, the yields on both the 10-year and 30-year Eurobonds both gained by 0.2 percentage points to 8.1 percent and 9.1 percent from 7.9 percent and 8.9 percent the previous week, respectively.

Since the issue date, the yields on the 10-year and 30-year Eurobonds have both increased by 0.9 percent and 0.8% points, respectively.