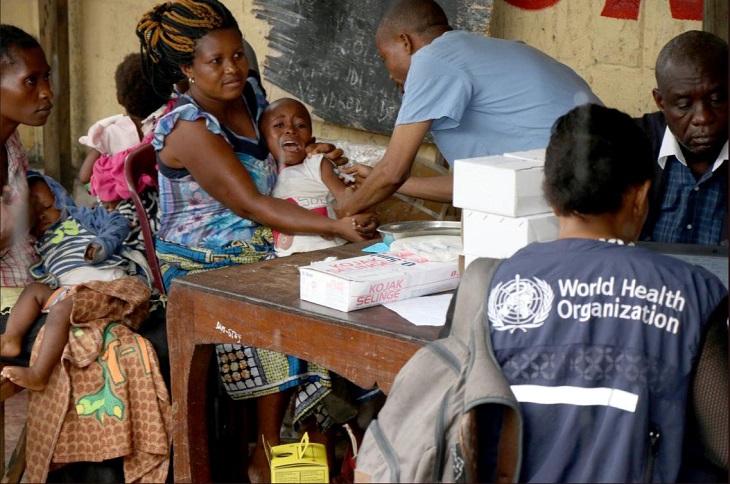 United Nations (UN) health agency, World Health Organization (WHO), reported on Wednesday 28th November, 2019, that more than 5,000 deaths have been caused by measles in the Democratic Republic of Congo (DRC).

According to the Director of immunization department of WHO, Kate O’Brien, DRC’s measles outbreak is the largest outbreak ever witnessed globally as the more than 5,000 deaths have occurred since January this year.

Speaking in Geneva, O’Brien also noted that the huge number of measles death in DRC has surpassed that of Ebola which has been a problem in the country, by more than a half.

WHO reports showed that by Novemebr 17th , the country had registered 250,270 measles cases and by the same date 5,110 people had died from the highly contagious disease, most of whom were children under five years of age.

While measles has proven to kill more people in the country than Ebola has in the past year, measles outbreak has not been in the limelight, even though there were campaigns launched to conduct emergency vaccination against the virus.

Measles is said to be one of the world’s most contagious disease that is caused by a virus which attacks mostly children under five and adults over 30. It can cause complications, more severe ones being blindness, encephalitis (an infection that causes brain swelling), severe diarrhoea and related dehydration, ear infections, or severe respiratory infections such as pneumonia.

Given that measles is highly contagious and spreads by the mere fact of being close to an infected person, WHO has decided to train medical practitioners dealing with the Ebola epidemic to also handle measles issues.

According to Ian Norton, head of WHO emergency unit, the epidemic is all over the country and is affecting mostly children and babies, yet ebola is still a nuisance, therefore creating a huge burden for health workers.

Beni, which is on the Eastern part of the country and which has been most affected by Ebola and now measles, is also the hotbed of insecurity, where people are killed by armed groups.

WHO has been forced to move some of its stuff from the region following the killing of 94 civilians, making the vaccination campaigns way harder to complete.

WHO has raised an alarm concerning the insecurity saying that while the attacks may not be directed to health workers, it makes it difficult for them to head to work and even more difficult for the sick people to come and seek help.