Data released by the World Health Organization (WHO) has revealed that measles cases across the globe have risen by 300 percent in the first three months of 2019.

The figures indicated that while all regions across the world experienced a spike in outbreaks, Africa was the worst hit with its cases soaring to 700 percent.

Alarming enough as that is, the WHO said that the actual numbers could be much greater as only one in ten cases gets reported worldwide.

The worst affected country is Madagascar, where at least 800 people have died from Measles since September 2018 despite a huge emergency vaccination program. 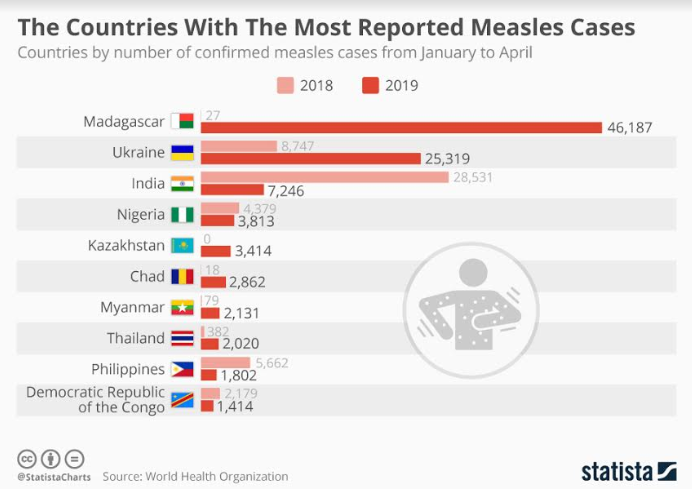 Measles is a highly contagious viral disease that can cause complications including blindness and brain swelling and increase susceptibility to other diseases.

Madagascar is among Africa’s poorest countries, and in 2017 only 58 percent of the population had been vaccinated against measles. “The lack of a big outbreak since 2003 also means many have had no chance to develop immunity” WHO said in a statement.

The island country has Africa’s highest children’s malnutrition rate, at 47 percent. This condition can increase the risk of serious complications and death from measles infection, the WHO says.

Ukraine has recorded the second highest number of measles cases, 25,319. Health authorities said vaccine shortages in previous years were the main reason behind the current outbreak.

India came in with the third-highest cases with 7,246.

The geographical variation of the countries struggling to contain the disease starkly illustrates its new global prevalence.

Worryingly, spikes in measles cases have occurred in countries with high levels of vaccination coverage such as the United States, Israel, Thailand, and Tunisia.

In New York, Mayor Bill de Blasio declared a public health emergency in parts of Brooklyn after a measles outbreak in an ultra-Orthodox Jewish community.

Signs and Symptoms of Measles

Measles is caused by a virus in the paramyxovirus family and it is normally passed through direct contact and through the air.

The virus infects the respiratory tract, then spreads throughout the body.

The first sign of measles is usually a high fever, which begins about 10 to 12 days after exposure to the virus, and lasts 4 to 7 days.

A runny nose, accompanied by a cough, red and watery eyes, and small white spots inside the cheeks are known to develop in the initial stage of infection.

After several days, a rash erupts, usually on the face and upper neck. Over about 3 days, the rash spreads, eventually reaching the hands and feet.

The rash lasts for 5 to 6 days and then fades. On average, the rash occurs 14 days after exposure to the virus (within a range of 7 to 18 days).