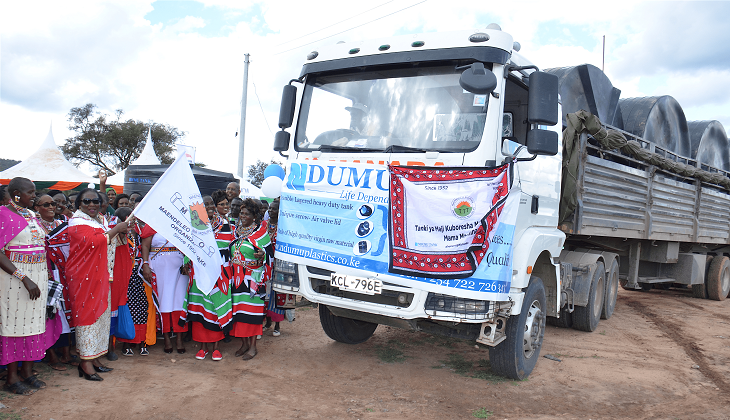 The Maendeleo Ya Wanawake Organization kicked off its Water Project Tanks in a colorful event at Basil, Kajiado County where the Maa women were more than glad to receive the fifteen tanks with a capacity of ten thousand liters.

The colorful handover of the fifteen tanks with a capacity of ten thousand liters was flagged off by the National Maendeleo Ya Wanawake Organization Chair Mrs. Rahab Muiu.

The Kajiado handover, of the fifteen tanks by the Maendeleo Ya Wanawake Organization (MYWO), was slammed by former MYWO chairperson and Senator Zipporah Kittony and all the organizations’ national officials.

The delivery of the fifteen water tanks by the Maendeleo Ya Wanawake Organization officially kicked off the organization’s bid to ensure water harvesting takes place in the rural areas to ease the life of the rural woman who has to walk long distances to fetch water.

“Most women in the rural areas have to walk for a long distance to fetch water which is a necessity and whose process of carrying becomes detrimental to their health, which is what has fueled the MYWO Water Tank Project,” said Beth Syengo, the Deputy National Treasurer during the MYWO Water Tank project in Kajiado County.

The fifteen tanks were just the start of a project that is meant to see the Maendeleo Ya Wanawake Organization tour the 47 Counties mobilizing women to harvest water by acquiring the water tanks.

The Water Tanks Project is a result of a successful Memorandum of Understanding (MoU) between the Maendeleo Ya Wanawake Organization, Musoni Microfinance and Ndumu Water Tanks with the goal of ensuring that every rural household has tapped water in its compound.

Harvesting of water has for long been sensitized in Kenya with an obvious existing gap of the availability of storage containers to enable the process which is the gap the Maendeleo Ya Wanawake Organization seeks to fill to ensure the best welfare for the rural woman.

The large capacity of the water tanks delivered to the Kajiado County by the Maendeleo Ya Wanawake Organization through the signed MoU with Ndumu water tanks and Musoni Microfinance is meant to ensure the rural families can go from one rainy season to the other.

“Water is life. We do not want our mothers walking long distances in search of water. The journey begins from Kajiado and it is our intention to ensure that no woman who is a member of MYWO has to tarmac to get water,” Mrs. Rahab Muiu, the National Chairperson said as she flagged off the water tanks in Kajiado County.

About Maendeleo Ya Wanawake Organization

Maendeleo Ya Wanawake Organization (MYWO) was registered in 1952. It is a national membership Non-Governmental Organization. It seeks to unify, nurture and empower women socially, economically and politically to be able to deal with the unique challenges that face them in society.

MYWO was first organized by the Department of Community Development and Rehabilitation within the colonial government. At the time of independence, the leadership of the organization was turned over to African women.

The newly independent government rewarded MYWO’s efforts by funding their projects and distinguishing the role of the organization as a welfare agency. Overtime, MYWO’s grassroots network expanded to eight provinces of the country and the leadership was made up of a chain of elected representatives from the smallest administrative unit up to the national level.

Today, MYWO boasts of a nation-wide network of over 4 million individual members and 25,000 affiliate groups.

MYWO’s efforts in women’s mobilization were instrumental in building schools, clinics, and community centers across the country. By the mid- the 1970s, MYWO had raised enough money to build Maendeleo House in the Central Business District of Nairobi.