Ridiculous As President Museveni Leads The Walk Against Corruption. 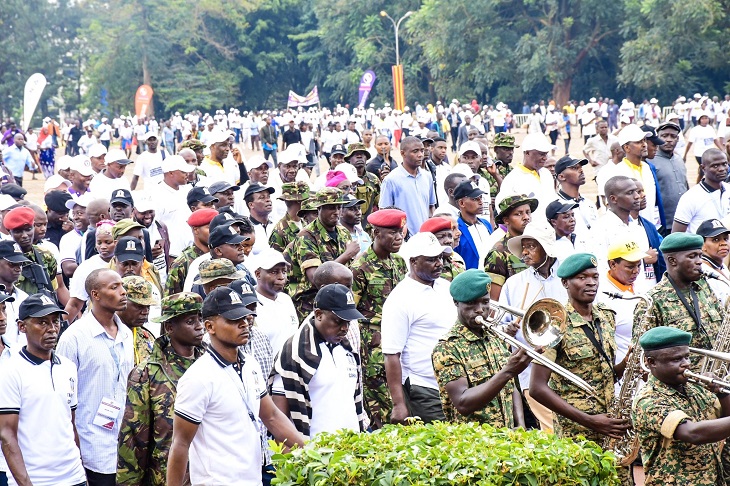 Uganda’s Anti-Corruption Walk is an indication of a high level of commitment and visibility in the fight against corruption in Uganda.

The walk took place on Wednesday, December 4 and to be led by President Yoweri K. Museveni as organized by the State House Anti-corruption Unit from the constitutional square to the Kololo independence grounds in Kampala under “a theme a corrupt-free Uganda starts with me”

Millions of Ugandans have already poured hot water on the initiative saying the whole idea is a mockery, intended to confuse Ugandans that Museveni has the will and urge to fight corruption, which apparently is not the case to them in relation to the current national statistics. This has actually gotten so many Ugandans laughing and attending to the walk for formality due to amusement at Museveni’s shamelessness.

You would  excuse Ugandans for being dubious going my the statistics;

Thousands of Ugandans hit the Kampala streets to join the president in his walk against corruption. Despite the fact that President Museveni has failed Ugandans in matters regarding the fight against corruption, and having spent three decades in power, they turned up in large numbers claiming that Uganda is their country and not Museveni’s.

President Museveni has spent 3 decades in power and his government has been termed as the most corrupt in the history of Uganda. For him to lead this walk against corruption is another way of trying to confuse the public about being concerned, when in reality, he does not care. Corruption will remain a central issue and a thorn in his backside as long as he continues to entertain top corrupt government officials including ministers and permanent secretaries.

Should Ugandans term this walk an absurdity and wastage of time because it is obvious that Museveni can never tackle corruption unless he begins from the top which is his greatest weakness?