How New Regulations Are Shaking Up The World’s Fastest Sport

There are three main technical changes: ground-effect floors, new wing designs (both front and rear), and new regulations for wheels and tires. 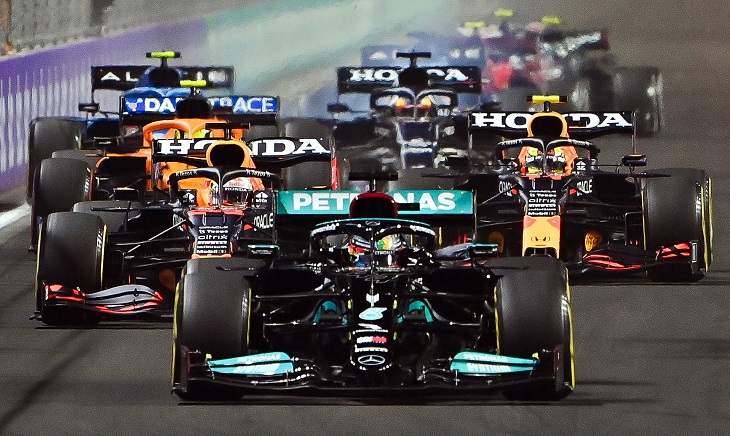 epa09624652 British Formula One driver Lewis Hamilton (front) of Mercedes-AMG Petronas is on his way to win the inaugural 2021 Formula One Grand Prix of Saudi Arabia at the Jeddah Corniche Circuit in Jeddah, Saudi Arabia, 05 December 2021. EPA/STR

The new regulations, which were initially set to be introduced in 2021 but delayed by a year due to the Covid-19 pandemic, are aimed primarily at making overtaking easier, thus leading to more exciting on-track racing.

Viewers on DStv can look forward to exclusive coverage of the 2022 Formula 1 World Championship, with the new season getting underway in Bahrain in March and scheduled to run through 22 rounds in total, finishing up in Abu Dhabi in late November.

While the 2021 season was all about the epic fight for the title between Mercedes’ Lewis Hamilton and Red Bull Racing’s Max Verstappen, the 2022 season ushers in a new era for the world’s fastest sport due to a slew of new regulations which should make the new campaign the most unpredictable for many years.

The new regulations, which were initially set to be introduced in 2021 but delayed by a year due to the Covid-19 pandemic, are aimed primarily at making overtaking easier, thus leading to more exciting on-track racing.

There are three main technical changes: ground-effect floors, new wing designs (both front and rear), and new regulations for wheels and tires.

In terms of ‘ground effect’, this refers to the 2022 cars having two long underfloor tunnels which effectively ‘suck the car toward the tarmac, ensuring more of the downforce is generated from under the car rather than the wings. The concept was popular back in the 1970s and ’80s in F1.

“You’ve created a vacuum,” said former F1 driver and current pundit Anthony Davidson. “There’s suction to the ground, and you’re relying less on the wings to give you rear grip, and more on the floor.”

The new wing designs (with the front wing very much simplified and the rear given a ‘wavy’ but sharp look) should allow for airflow over the vehicle to be narrowed and ‘cleaned up’, thus allowing cars to follow closer to one another compared to previous years where the messy aerodynamic wake greatly affected those trying to overtake. The DRS (drag reduction system, where a flap of the rear wing folds away to allow for greater straight-line speed) is still present but should be less effective.

In terms of tires and wheels, F1 has moved up to 18-inch (compared to 13 inches previously) which are both aesthetically pleasing and should allow for better handling. In addition, there are winglets over the front tires and wheel covers which aid in ‘cleaning’ the aerodynamic wake.

All of these changes mean that every team has had to start with a blank slate for 2022, thus likely shaking up the order on the grid. That doesn’t mean that Mercedes and Red Bull, the teams which dominated last year, won’t again be competing for top honors, but it should allow for the likes of Ferrari and McLaren to challenge on a more regular, while the gap from backmarkers like Williams and Haas should narrow to the midfield teams like Aston Martin and AlphaTauri.

In summary, the cars are heavier and slightly slower than last year (though you can bet that development will see that gap narrow rapidly), but they are more aesthetically pleasing, should allow for much more exciting on-track racing, and will allow for a greater level of competition across the grid. In short SuperSport viewers are the major winners!