According to Business Dictionary, Innovation is the process of translating an idea or invention into a good or service that creates value for which customers will pay. The dictionary goes on to say that, to be called an innovation, an idea must be replicable at an economical cost and must justify a specific need. Innovation involves deliberate application of information, imagination as well as initiative in deriving greater or different values from resources.

Kenya has more than 40 banks with economists pointing out that the country is overbanked. According to Soko Directory, Kenya has a total of 42 commercial banks, 12 microfinance banks, one mortgage finance company, eight representative offices of foreign banks, 86 foreign exchange bureaus, 14 money remittance providers as well as three credit reference bureau. All these banks as well as the financial institutions have mobile apps. 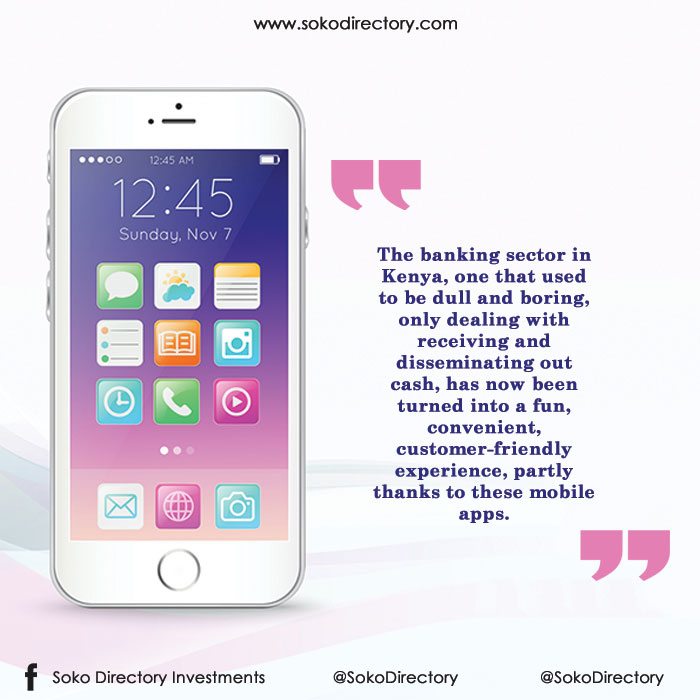 This article is not trying to discredit the great work being done by the mobile apps in the banking sector. The apps are amazing. In fact, they are the ones that have brought a revolution in the banking sector. The banking sector in Kenya, one that used to be dull and boring, only dealing with receiving and disseminating out cash, has now been turned into a fun, convenient, customer-friendly experience, partly thanks to these mobile apps. Using the MCo-op Cash app from Co-operative Bank of Kenya for instance, the app has some amazing features and services that have transformed the services of the bank like:

Such services as listed above, being done by a single banking mobile app are amazing. Right? That is also innovation but on a technological part. Kenyan commercial banks have not yet fully utilized the innovation for their own benefit. What the banks are doing is just copying each other so that all the banks now have mobile apps which are nice but that’s all there is to it. Having an app is one thing but having an app that does something different from the obvious is what makes all the difference.

The signing of the Banking Amendment Bill into law by President Uhuru Kenyatta on 24 of August 2016, really showed that Kenyan commercial banks were not prepared for any kind of drastic changes.

The banks, under their umbrella, the Kenya Bankers Association were against the signing of the bill into law. They cited among other things that they would incur massive losses and that the general economy of the country was likely to suffer drastically. Some economic analysts supported that too though there was no enough evidence that could prove beyond any reasonable doubt that the economy was going to shrink as a result of the signing of the bill into law. President Uhuru Kenyatta went ahead and signed the bill into law. That day was like a mourning day for the Kenyan commercial banks. All in the banking halls things seemed gloomy as the banks lost hope and pondered about their future in the economy of Kenya. On 25th of August, barely 24 hours after the President had assented to the bill, Kenyan commercial banks were already losing at the Nairobi Securities Exchange. The losing expedition remained the same on the following day of 26th of August. The banks were really panicking though they are stabilizing.

Read: Banks Top Losers at the NSE on Thursday

There are several areas that Kenyan commercial banks need to be more innovative as one way of bettering their services as well as retaining their customers.

Kenyan banks need to invest a lot in the customer relation. The customer relation is currently very poor. What Kenyan banks fail to understand about customer relation is that it goes beyond just smiling and talking nicely to the customer. People tend to relate to things and people that care about them. Kenya Commercial Bank is trying through wishing their customers happy birthdays whenever their birthdays reach but a lot still needs to be done. What about informing the customer, using those messages on the importance of saving for instance? On why they should invest? On why they should pay their loans in times and so on?

One of the lame reasons that Kenyan commercial banks gave against the signing of the interest rates bill into law was that money Kenyans will have access to loans and then fail to pay back hence leading to the incurring losses. What a lame excuse? The problem with Kenyan banks is that they give loans and give no damn whether the money is going to be well utilized or not. They never do a follow up. Why can’t the Kenyan banks take it upon themselves to be visiting those they have loaned their money to for businesses to see how businesses are doing as well as giving them more tips on how to make their businesses better? It doesn’t hurt to visit someone you have given your money just to make sure that the money is being used well and know whether the person will pay back.

The mobile apps available in the banking sector in the Kenya at the moment are general apps. That is; one app performing all the operations and services being offered by the bank. What commercial banks should realize is that despite the fact that they are dealing majorly with finances, the market is largely segmented and it would be better if they had segmented apps too. A bank can have an app that deals with the youths only, another for teachers, another for various products and people whose the app is tailored to will feel appreciated and will actually subscribe to services.

There are many areas that the Kenyan commercial banks need to improve. The above are just but a few and to jolt the mind of the stakeholders in the sector to start thinking outside the box.