Kenya’s inflation rose to 6.47 percent in October, from 6.34 percent in September attributed to the continuous rise in food prices according to the Kenya National Bureau of Statistics (KNBS).

In a statement on Monday, KNBS said that on a month-on-month basis, the inflation was at 0.62 percent, compared with September’s 0.34 percent.

Between September and October 2016, Food and Non-Alcoholic Drinks’ Index increased by 0.96 per cent  attributed to increase in prices of several food items which outweighed the decreases.

The Housing, Water, Electricity, Gas and Other Fuels’ Index, increased by 0.16 per cent partly contributed by increases in house rents which outweighed notable falls in the costs of kerosene and cooking gas.

Despite notable fall in the cost of diesel, the Transport Index increased by 0.37 per cent in October 2016 compared to September 2016 mainly on account of increases in the pump prices of petrol. 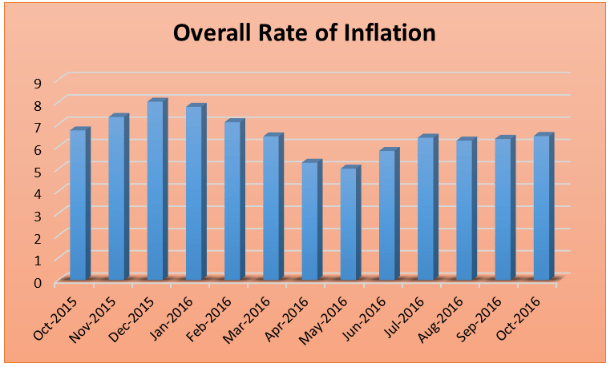