East African Community (EAC) member states should hasten the finalisation and enactment of the EAC Anti-Counterfeit Law in order to establish a regional framework to fight counterfeits, stakeholders have recommended.

This was raised at the end of the second regional anti-illicit trade conference in Nairobi, Kenya, recently which was organised by the East African Business Council (EABC), in partnership with the EAC Secretariat.

Rwanda has defied expectations and emerged as one of the fastest growing economies in the world, overcoming the many obstacles involved with being a small, land-locked nation in the middle of Sub-Saharan Africa.

The economy has grown by an average of nearly 8% a year since President Kagame was elected to office in 2000. The World Bank estimates annual growth will hit at least 7% in the next three years. Overall, per capita income in Rwanda has more than tripled during the past 14 years; more than one million people have moved out of poverty; infant mortality rates have been cut by two-thirds; and Rwanda has achieved nearly universal access to primary and secondary education.

Is the honeymoon over for African economies? Less than a decade ago, it seemed that the continent’s economic dreams were beginning to come true, with many countries experiencing impressive GDP growth and development. Now, as the harsh reality of the continent’s vulnerability to challenging external conditions has set in, sustaining that growth has proved difficult.

But a deeper look suggests that things may not be as bad as they seem, for two key reasons. First, though average growth has declined, some African economies have thrived in recent years. Indeed, aggregate GDP has been dragged down since 2010 by faltering growth among oil exporters and security-related crises in the Sahel and North Africa; but in the rest of Africa, GDP growth has accelerated, from 4.1% in 2000-2010 to 4.4% in 2010-2015.

Second, Africa is undergoing a profound long-term transformation, characterized by rapid digitization, urbanization, and growth in the working-age population, which will outnumber the labor force of China and India by 2034. That demographic trend could unlock future growth by advancing economic diversification, spurring domestic consumption, and supporting industrialization.

Growth in Africa sub-Saharan region will slow to 1.6pc in 2016

The World Bank’s quarterly report says growth in Africa sub-Saharan region will slow to 1.6% for the region this year. 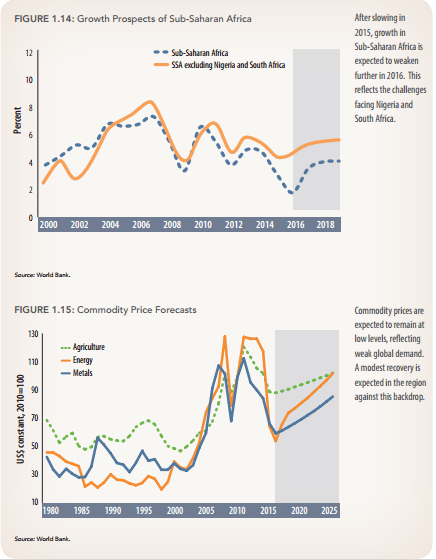 A new World Bank study on poverty and shared prosperity says that extreme poverty worldwide continues to fall despite the lethargic state of the global economy. But it warns that given projected growth trends, reducing high inequality may be a necessary component to reaching the world’s goal of ending extreme poverty by 2030.