Male Chauvinism in the U.S Elections and What that Means for Africa

Starting from our own homes, the father is the head and he has the final say in every discussion or decision that has to be made within and without the family. This is because he is the provider since a mother is perceived to be a “mere” house-wife as it will be put.

My mother was lucky to be educated and she holds a diploma in Education, as she was telling me, she grew up with the dream of being a teacher one day. Despite the fact that she had to drop out of school several times so as to allow her younger brothers to go to school as they were given priority than her. Finally, she managed to clear and wet to college where she acquired her Diploma certificate.

She was among the few girls who were privileged to have gone to school and for that reason she happened to be the “hot cake” in their village especially among men. Her education was what led to their marriage with dad, who was the District Education Officer of that area.

Marriage changed everything. My mother had to let go of her job as a teacher as she had other tasks which were more important to attend to other than her career. She needed to be a proper wife, a mother and a home maker.

Due to these reasons, it was said that there was no way both her and dad could manage going to work, who then could have looked after the children? That is how things were done and she left her job, came back home to be a wife.

I have just been wondering, if at all my mother had been given the opportunity to fulfill her dreams at that time, where could she be? What kind of a person would she be now, apart from being a mother? But she was denied the chance to show the world what she was capable of doing other than being a wife and giving birth to children. 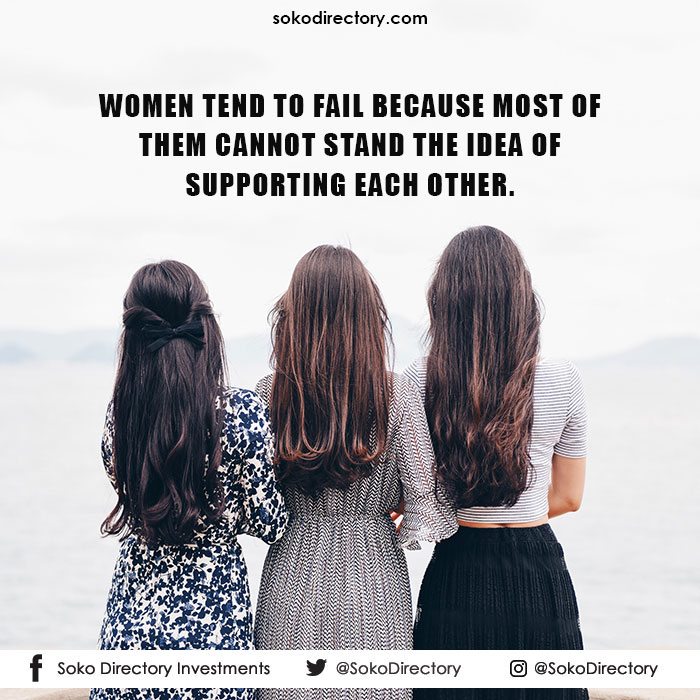 Africa has been known to lead in male chauvinism. Men have taken over most leadership positions from home, to politics to other areas that need to be led. Women keep complaining that they are being denied opportunities to show the world what they can do, but my question is, do these same women support each other to achieve that? Given that they believe that men cannot give them the said opportunities.

Women tend to fail because most of them cannot stand the idea of supporting each other. Each one of us want to be the one doing that, yet that cannot work. A simple example is from the just concluded U.S elections, which caught the attention of the whole world. It is a fact that a good percentage of us believed that Secretary Hillary Clinton was going to be the 45th President of the United States of America but what happened? What exactly went wrong?

According to the exit poll data that were collected by The New York Times, More than half of the white women who voted in the presidential election cast their ballot for Donald J. Trump. The data indicated that 94 percent of black women who voted and 68 percent of Hispanic or Latino female voters chose Hillary Clinton, but 53 percent of all white female voters picked Mr. Trump.

Let us imagine what could have happened if all women in the United States came out to support Hillary Clinton sincerely by voting for her. Without doubt, she could now be the president and a history could have been made, which in turn could have changed the current perception on women leadership across the globe.

This was the one time and one chance that we had as women to make history. Who plucked the sense out of women? Many more women in the world, and especially in Africa could have been inspired by the fact that Hillary Clinton, a fellow woman had made it to the top seat. This was a betrayal of the highest order, and as I stated earlier, lack of support among women.

It is time that we change our perceptions and our thinking. It is time that women take lead in the political arena and the business world. We are capable of achieving all these only if we start supporting each other genuinely. We need to see more Hillary Clintons who have visions of transforming the world.