Kenyan Electorate torn between Political Parties, Manifestos and the reality 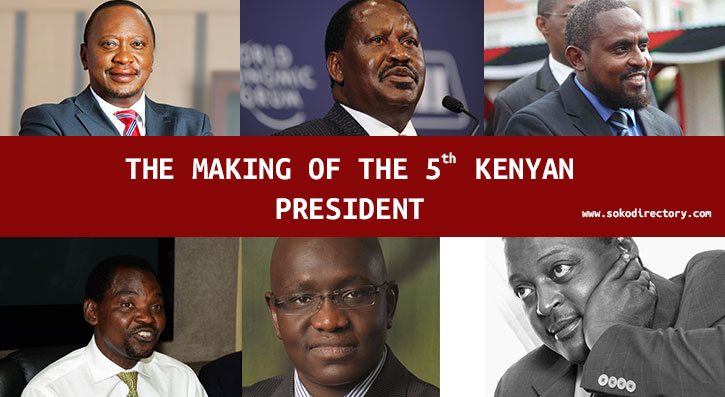 Kenya gears itself for its second General Elections after the promulgation of its Constitution in 2010 to elect its 5th president and fill the expanded political elective offices both at the National and Devolved County Governance structures.

Already, there is excitement, heightened expectations and intense jostling for power.

The Independent Electoral and Boundaries Commission (IEBC) has already disclosed the number of certified voters who will participate in the exercise. On the other hand, the Judiciary is finalising cases brought before it -Jubilee Party and National Super Alliance (NASA) are in court on who should be contracted to print presidential election ballot papers.

As these events happen. Kenyans are in the season of cannibalistic selfishness where it is me, me, me and my tribe, my tribe my tribe.  This is the season of political fantasies, fraud, hypocrisy and impunity. It is as if nothing else matters but politics.

For the electorate who is now consuming a lot of information from politicians touring their neighbourhoods, they are at a crossroads.

The question is? Besides the political rhetoric, what do they have that will help them  pierce the smokescreen, the veils, the masks of political parties and individual politicians parading before them and shouting how they are the best recipe once elected to be the agents of transformation of their communities, counties and the country?

How will they make choices as to which political party or individual politician to vote for through a rational process of examining the pros and cons of each alternative on the political platform?

How will each voter prick his or her conscience, undertake a meticulous scrutiny of the offers in the political arena before he or she makes a decision?

The answer comes in different ways.

“The most important documents to this end are the party constitution,manifesto and any other party position papers,” according to Prof. Karuti Kanyinga in Kenya, Democracy and political Participation.

“Most parties are also not formed along ideological lines, but rather on a given leader’s ambition to win elections,” he adds.

Kanyinga argues that a critical look at the various party manifestos and other policy documents in Kenya reveals striking and remarkably similarities. “Most if not all, political parties in Kenya espouse the tenets of social democracy. however, these tenets are rarely put into practice and remain only in paper.”

“Furthermore, even where such party manifestos exist, they never form the backbone of the campaign strategies and platform. only major parties in each election year develop manifestos outlining the policies and programmes that they intend to implement once in office,” says Kanyinga. 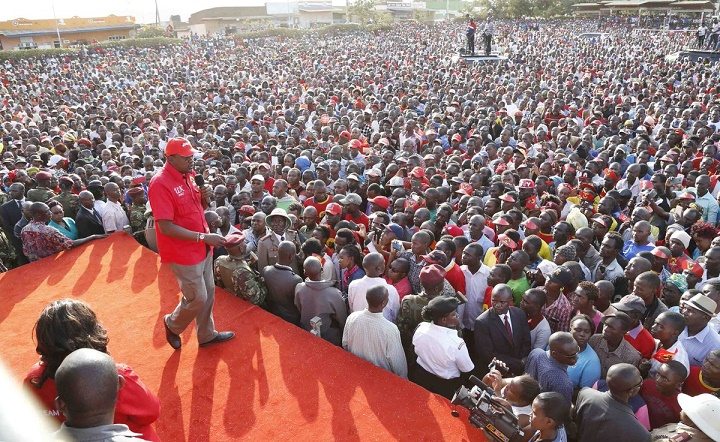 The Jubilee Party and the National Super Alliance (NASA) the major political parties in Kenya ahead of the August Presidential and National Elections, have both released their manifestos each committing  to steer the majority of the citizens of the country out of poverty, ignorance, deprivation, want, disease hopelessness, unemployment, insecurity and other myriads of socio-economic maladies.

The current leadership is tainted by corruption, rising debt -Sh4.4 trillion, about 52 per cent of the GDP – and increased unemployment rate which the opposition is using to unseat it.

High cost of living has pushed inflation to a five-year high in May.

The Kenya National Bureau of Statistics (KNBS) have reported a slowed growth of 4.7 percent in the first quarter 2017, down from 5.9 percent in the same period of 2016.

Private sector credit growth dropped to 3.3 percent in March from 17 percent at the end of 2015, after the central bank tightened regulations and introduced an interest rate cap.

President Uhuru Kenyatta and his deputy William Ruto through their newly revamped Jubilee Party are seeking another five year term in office and set to face off with the opposition led by their arch rival Former Prime Minister Raila Odinga under the NASA coalition which has Ford Kenya’s Moses Wetangula, Wiper Party’s Kalanzo Musyoka, Musalia Mudavadi (ANC) and Isaac Ruto (Chama Cha Mashinani).

I believe my Government’s record is worthy of support and I ask you for your vote on August 8th 2017. pic.twitter.com/tgpDUZwJ8o

“Alongside you all, Jubilee has been hard at work across this country and laid the foundations for a vibrant and modern Kenya that provides us all with the platform to achieve our true potential. This work continues,” says President Uhuru Kenyatta. “We must now redouble our efforts to build upon the foundations of success. The task is not yet complete. The work must continue and should not be derailed.”

On the other hand, NASA manifesto plans to ‘meet the great challenges of our time for a Stronger and Prosperous Kenyan Future’, riding on a seven pillar vision and policy platform that will pursue five objectives: to promote national unity, to uphold, guard and respect the dignity of all individuals and communities, to return the country to the path of constitutional and democratic development, end the culture of impunity and to restore sanity in the management of the economy and public affairs of the nation.

Foremost in our road map to remaking Kenya is to develop a national identity. Understanding what makes us Kenyans and good citizens pic.twitter.com/NhxZsibRZz

For a country whose unemployment rate stands at 40 percent, Jubilee Party if elected commits to concentrate investments in the sectors that are growth oriented and job creating. “We commit to creating at least 6.5 million jobs over five years to ensure that our people, particularly our youth, can secure and maintain good jobs that enable them to enjoy a decent life.” 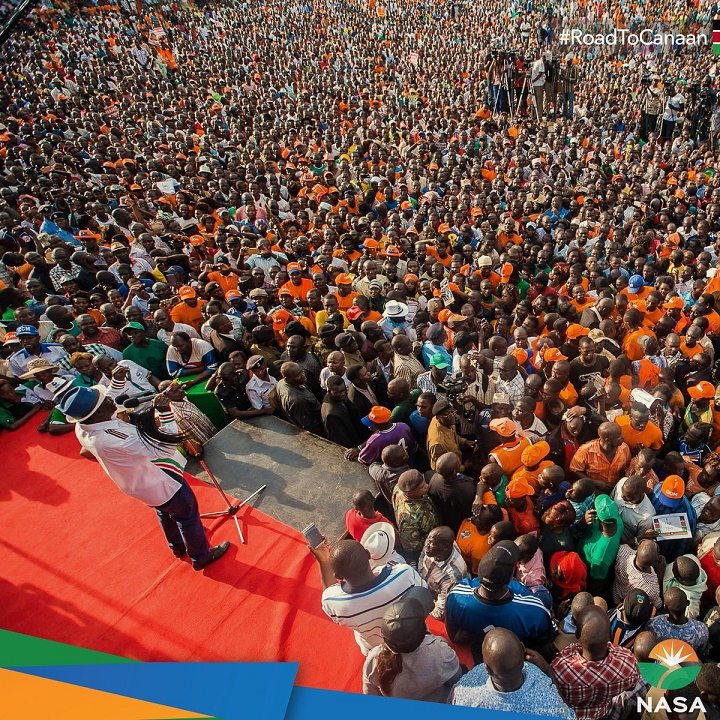 NASA targets a real GDP growth rate of 10 percent p.a and above for the next 5 years with the private sector as the main source of growth and employment creation. They project to achieve and sustain macroeconomic stability characterized by single digit inflation, low and stable interest rates and floating exchange rate regime.

“These economic policies will restore credible public financial management and to return the country to the path of sustainable borrowing, that is, a budget deficit not exceeding 3 percent of GDP,” according to NASA’s impact of their policies.

Both parties claim that if elected, their health strategies will deliver accessible and quality healthcare to all Kenyans.

In the education sector, Jubilee says they will, “Work towards achieving a 100 percent transition from primary to secondary school by providing free education in all public primary and public day secondary schools. No child, irrespective of background, will drop out of school because they cannot afford tuition fees.”

NASA states that quality higher education in Kenya still reflects the system of privilege for the better-off in society due to its financial costs. For them, 90 days into power, “Immediately implement free secondary education. Devolve primary school and secondary school  infrastructure development as a function to the county  governments to enable the national government to concentrate  on quality.”  They will also scrap Jubilee Party’s laptop project and redirect the money towards building computer laboratories and libraries in schools.

Both have committed  to enhance and improve the country’s infrastructure network that will make it possible for people to interact and to trade and also facilitate integration, inclusion, mobility and security. 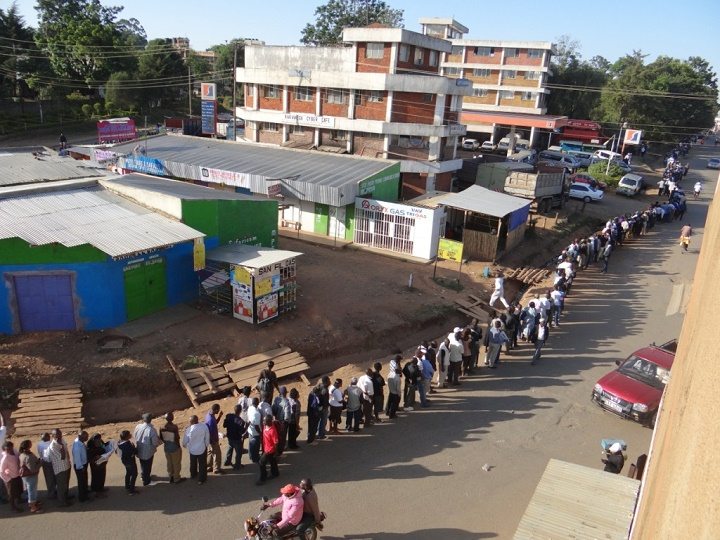 To the electorate, these might  neither be realistic nor practicable in addressing their expectations. Questions on capacity and resources in implementing them still remain a facade.

As the clock ticks to August 8, 2017, it is now the sacred duty of the electorate to evaluate, interrogate, scrutinize the abilities and characters of all those presenting themselves for election to constitutional offices. They must look beyond the smokescreen, masks of political parties and examine the actual candidates. Euphoria, hysteria, frenzy, stereotyping, sentiment, nostalgia, fear and self-delusions of choosing leadership will only make them live in an illusion for the next five years.

They should synthesise the agendas from the manifestos presented before them that define their vision and hopes and when the D-day comes, they will be able to vote for a leader who advances their values, hopes and aspirations.