The Kenya National Bureau of Statistics has released the inflation rate for the month of October even as the country remains uncertain due to the prevailing political situation in the country.

The image below shows the inflation trend on a year on year basis:

The decrease in the inflation between the month of September and October, the CPI for food and non-alcoholic drinks decreased by 1.78 percent. The drop has been attributed to the drop in the cost of several food items which was mainly attributed to favorable weather conditions.

The year on year food inflation has dropped to 8.47 percent in the month of October this year. However, according to the KNBS data, the index for housing, water, electricity, gas and other fuels increased by 0.47 percent due to the increase in the cost of house rents, electricity, and other cooking fuels. The higher cost of electricity was attributed the increasing foreign exchange adjustment charges despite the fuel cost and other charges, remaining constant. The Transport Index recorded an increase of 0.86 percent over the same period, mainly on account of increase in pump prices of petrol and diesel.

The image below shows the change in various products: 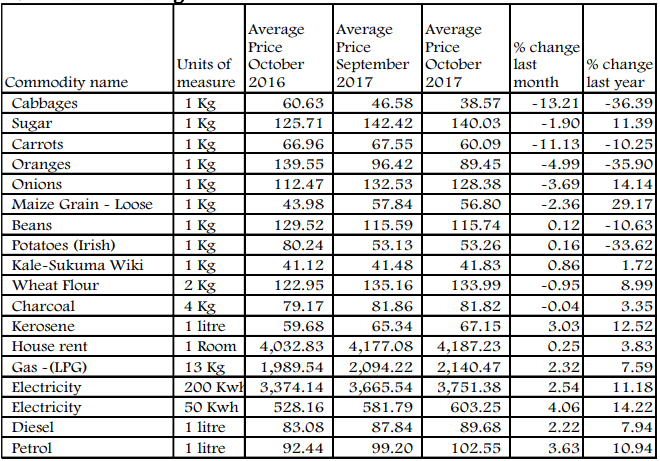 At the same time in 2016, the inflation rate stood at 6.47 percent. This year, Kenya’s inflation rate reached its peak at 11.48 percent in April as a result of increased food prices.