Rolling out of the New Digital Licenses by NTSA Postponed 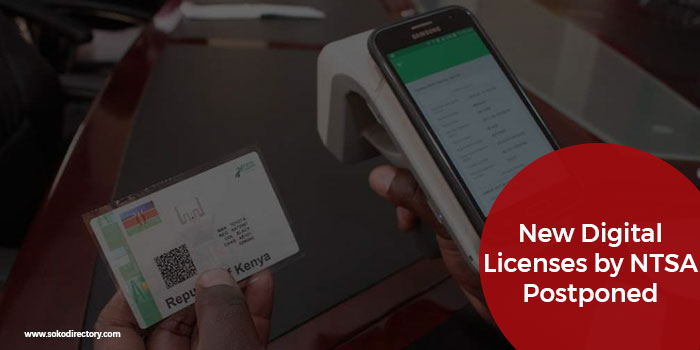 Implementation of phase two of issuance of the third identifier stickers has been postponed by the National Transport and Safety Authority (NTSA).

According to a statement from NTSA, the move for the postponement comes about due to some ‘unavoidable’ circumstances.

The rolling out process had earlier on been set to be October 1, 2017.

The statement noted that some sections of the media had given out wrong reports on the same.

“Contrary to reports and perceptions created by sections of the media to the effect that all registered vehicles will be fitted with the third identifier sticker, we wish to clarify as follows…,” read the statement.

According to a clarification from NTSA, these implementation process will be in three phases whereby the first phase, which already kicked out in July was the issuance of registrations to all first-time registrations and second-hand motor vehicles.

The second phase, which has been postponed to a later date will deal with issuance to all vehicle inspection on their due dates.

The third and final phase, on the other hand, will be a collaboration between NTSA and the insurance industry in facilitating the acquisition of the digital licenses by private motorists while at the same time renewing their motor vehicle insurance. This will take effect in 2018.

The smart licenses have instant fines capability software installed, which is aimed at penalizing petty offenders whereby the information will be relayed to NTSA’s database and fines paid ‘cashlessly’ so as to curb graft on the roads.

The rules frozen by court required motorists who commit minor traffic offenses such as talking on the phone while driving or exceeding speed limits will from Wednesday pay instant fines of between Sh500-10,000 shillings.

The list of minor violations included speeding, motorcycle riding without protective gear, failure to fasten seat belts, pedestrians blocking the free passage of cars, driving on footpaths and traveling with part of the body outside a moving vehicle.

Besides the instant fines capability, the card comes loaded with points to be deducted every time a motorist commits a traffic offense.

Repeat offenders who will have exhausted their points will permanently lose their licenses, have them confiscated temporarily, pay spot fines or be made to attend refresher driving classes.

The points system, widely used in the West to tame drivers, will see each motorist’s card loaded with 20 points that are to be deducted progressively at a rate proportional to the offense committed.

A driver will have a week or so to recover this “lost” point if he or she doesn’t commit other offenses. Serious offenses like drunk driving and speeding will result in deductions of more than 10 points, fines and a raft of other disciplinary measures that could see one lose their license for life.

The NTSA will also share the information on rogue drivers with insurance firms, a move that could see such drivers’ premiums rise as they will be deemed to be risky clients.