GirlChild: Kenya has Achieved Gender Parity in Education What Next?

Kenya has almost achieved total gender parity in education and aims to achieve a 100 percent transition from primary to secondary school by providing free education.

However, much more needs to be done to integrate gender issues into all aspects of policy and planning, not just in education but in all sectors.

Education Cabinet secretary Fred Matiang’i during the release of this year’s Kenya Certificate of Primary Education (KCPE) examination results at the Kenya Institute of Curriculum Development (KICD) Matiang’i said out of the 993,718 candidates who sat the 2017 KCPE examination, 498,775 were boys while 94,943 were girls.

He said an analysis of candidature trends by gender in the last four years indicates that the percentage increase in the number of girls has consistently been higher than that of boys over this period.

However, a recent survey by the Afrobarometer reports that Kenyans see gains in gender equality, but support for women’s empowerment still uneven.

“Although there are gains in gender equality in Kenya, the support for women’s empowerment is still uneven and this undermines many programmes aimed at integrating the principle of gender inclusion in development agendas and policy dialogues,” says Prof Winnie Mitullah, associate research professor and director at the Institute for Development Studies, University of Nairobi.

In the survey led by the Institute for Development Studies at the University of Nairobi, interviewed 1,599 adult Kenyans in September-October 2016, 73 per cent of Kenyans say women should have the same chance as men of being elected to office when it gets down to the ballot the country falls flat. 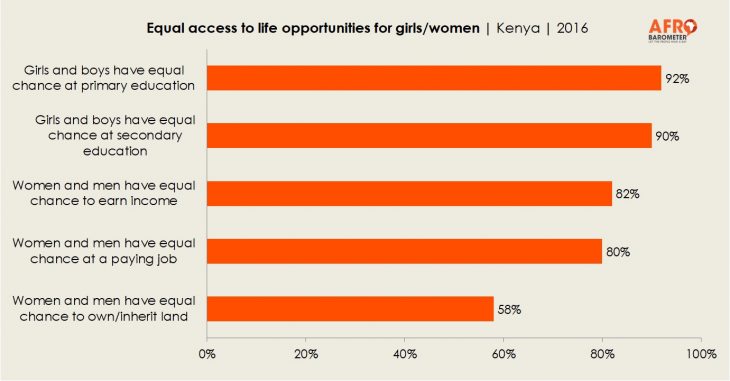 This is the case in spite of most Kenyans saying gender equality already exists due to a level education ground.

At least 92 per cent and 90 percent of respondents say girls and boys have an equal chance in primary education and secondary education respectively. About eight in 10 affirm that women have the same chance as men to earn an income.

To a girl, education holds the key to unlocking many of their obstacles facing them. However, ensuring completion of education by girls is still a challenge due to dropout rates as a result of teenage pregnancies, early marriages, and negative social-cultural attitudes

Further, ensuring that girls in Kenya reach their potential, it is critical to address issues that relate to sexual and reproductive health.

Kenya treats education as a basic need by the Government and is committed to the position of equal education opportunities for all persons.

Policy solutions the government has put in place to achieve gender equality include: The Children’s’ Act provides for the rights of all children as are provided for in the Committee on the Rights of the Child (CRC) and the African Charter. Key among them include :

The inherent right to life. The Government and the family have the responsibility of ensuring the survival and development of every child.

Right to Education- Every child is entitled to free and compulsory primary education the provision of which shall be the responsibility of the Government and the parents.

Another great milestone was the enactment of the Basic Education Amendment Bill (2016) that compels the government to provide free sanitary towels to schoolgirls who have reached puberty as well as providing for sound disposal mechanisms for the same.


This is seen as a remedy to cut on the absenteeism of girls from classes due to menstruation periods. This was after the Ministry of Education released data that indicated that for 4 days in 28 days of the month, a girl loses 13 learning days or 2 weeks of learning every school term.

Further, the government’s Manifesto Pillar One: Transforming Lives that aims to transform education and training for the 21st Century by investing in children and building their future, will be keenly observed.

In as much as the President Uhuru government has committed itself to expand the free primary school programme to include free day public secondary schools in Kenya, there should be concerted efforts by all stakeholders to address the issue of content, processes and context of education must be free of gender bias, and encourage and support equality and respect.

This includes teachers’ behaviours and attitudes, curriculum and textbooks, and student interactions. Efforts must be made to ensure personal security: girls are often especially vulnerable to abuse and harassment on the journey to and from school, and at school.

According to UNESCO, tackling gender parity and equality in education requires governments and other stakeholders to integrate gender issues into all aspects of policy and planning. One key policy framework is that of gender mainstreaming.

According to the government, they will reduce inequality and leverage on knowledge and skills in the areas of science, technology and innovation to make the country’s labour force truly competitive in the global marketplace.

“In the next five years, we will work towards achieving a 100 percent transition from primary to secondary school by providing free education in all public primary and public day secondary schools. No child, irrespective of background, will drop out of school because they cannot afford tuition fees,” reads part of the Jubilee Manifesto.