The Kenya Power and Lighting Company (KPLC) has been hit with a heavy headwind for the past few months following the recent frustrations from customers across the country regarding delayed tokens among other issues.

The company on its part has had a fair share of the ups and downs with the year 2017 among the one its share prices registered an upward trend with a slight drop in some months.

The lowest share price during the 2017/2018 quarter was in April last year where it averaged at 6.50 shillings per share. It maintained consistency for the next months until November where the average share price stood at an average of 10.7. 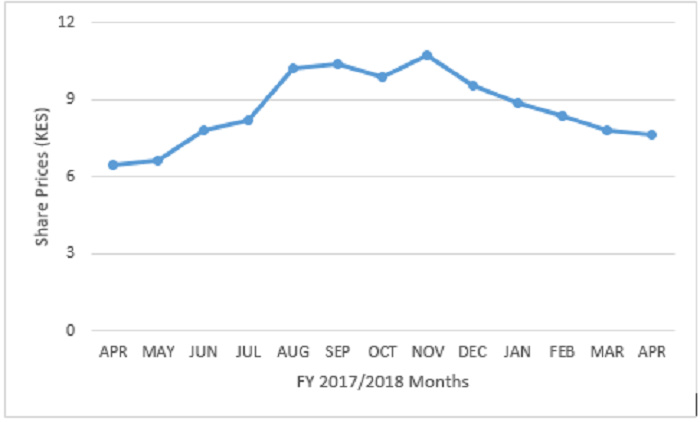 From the above graph, it is apparent that on average, KPLC’s share prices rose from April 2018 at 6.5 to November 2017 at 10.7 then dropped gradually.

The reasons for the drop include the company’s report of a 30.3 percent drop in the net profit in July – December 2017 financial quarter to 2.97 billion shillings compared to 4.2 billion recorded during the same quarter review in 2016. The drop was attributed to the general slowdown of the economy followed by an increase in the financing cost.

The company being in the spotlight is another factor that contributed to the falling of the share prices. Customers have been complaining about high prices for power. There has also been negative information particularly from pre-paid customers who raised concerns on delayed tokens, units running fast among other issues. These issues have contributed to the falling in the share price.

Customer prices increase is owed to the usage of thermal generation as a result of poor hydrology. The units generated from thermal plants increased by 416 GWh or 47 percent, from 885GWh in 2016 to 1,301 GWh. This raised the fuel costs by 6.0 billion shillings, or 97.4 percent from 6.2 billion shillings the previous year to 2.2 million shillings.

Despite the falling of the share prices, the company still has room and the advantage to reverse the situation.

For one, KPLC has a high demand. The customer base now stands at more than 6 million, has grown from 2.7 million in 2013. The company connects over 1 million customers every year.

KPLC’s presence in all the 47 counties gives it another advantage. It regularly carries out customer satisfaction surveys to determine their experiences with the brand and products. The responses from the survey inform the choice of the communication tools Kenya Power uses to engage customers.

As at December 2017, electricity sales stood at 3,893 gigawatts, a 2.3 percent increase from 2016’s 3,805 gigawatts. The increase led to sales revenue rising to 46.93 billion shillings from 45.79 billion shillings in 2016. The high revenue collection rate is another market strength the company enjoys.

KPLC also has the ability to attract external funding from both public and private, domestic and international sources. This, together with the ability to readily adapt to a changing and modernizing operating environment gives it an upper hand.

Some of the economic factors and other challenges facing the company include the movement of fuel prices, exchange rates, interest rates and inflation affecting input costs. These factors have the capacity to adversely affect the company’s business. The effect of these factors in raising the end-user cost of electricity lowers the competitive advantage, potential sales, and profitability of the company.

Previously, cases of vandalism and crime against company assets posed a substantial threat to the company’s direct material financial cost and resulted in some losses. However, the company has put in place measures such as fighting threats of vandalism of transmission and distribution of equipment, removal of illegal connections, carrying out security risk surveys, motor vehicle verification, and accident investigations.

Drought and hydro risk are other potential factors that can potentially cause a significant change in the end-user tariffs charged on monthly basis is given that 35 percent of power generation capacity in 2015/16 was hydro and that the standby alternative to hydropower is the much more expensive diesel power.

Despite its presence across all the 47 counties, power supply quality remains unsatisfactory and it is accompanied by high internal construction costs and high transmission and distribution operating costs as can be seen from the July – December financial results.

Kenya Power is also faced with some regulatory challenges. The Energy and Petroleum Bill 2015 seeks to implement the new National Energy Policy. A central aspect of the Bill is that it ends legal impediment to competition in electricity distribution and retailing.

The bill stipulates that the System Operator shall not be involved in direct or indirect buying or selling of electricity. This could see Kenya Power lose its System Operator function. Thus, the energy dispatch function associated with the National Control Centre is likely to be transferred to an independent transmission company.