Kenya has dropped one point in the global Corruption Perceptions Index 2018 after obtaining a score of 27 out of 100 despite President Uhuru’s intensified fight on corruption.

According to the Transparency International’s (TI) annual Corruption Perceptions Index, Kenya slid one point moving from 28 in 2017 to 27 in 2018.

The report placed Kenya at position 144 out of 180 countries.

TI Executive Director Samuel Kimeu said in the report that the executive has denied Kenyans public participation on national policies, which created avenues for graft activities.

According to Kimeu, the analysis showed a disturbing link between corruption and the health of democracies, where countries with higher rates of corruption had weaker democratic institutions and political rights.

Kenya has now dropped far behind Tanzania to the same level as Uganda followed closely by Burundi and Somalia.

Rwanda was ranked highest in the East African region and less corrupt garnering 56 points followed by Tanzania with 36 points, whereas Kenya and Uganda scoring 27 and Burundi with 17 points.

Kimeu added that Kenya’s score is below the global average of 43 and Sub Saharan Africa’s mean of 32.

“It is a composite index, a combination of surveys and assessments of corruption which is collected by a variety of reputable institutions,” he said.

The CPI highlights top countries were Denmark and New Zealand with scores of 88 and 87 while Somalia, Syria and South Sudan with scores of 10, 13 and 13 were ranked at the bottom.

For the seventh year in a row, Somalia and South Sudan, both ravaged by years of conflict, remain the most corrupt countries in the world.

Here is the Corruption Perception Index for sub-Saharan Africa Countries 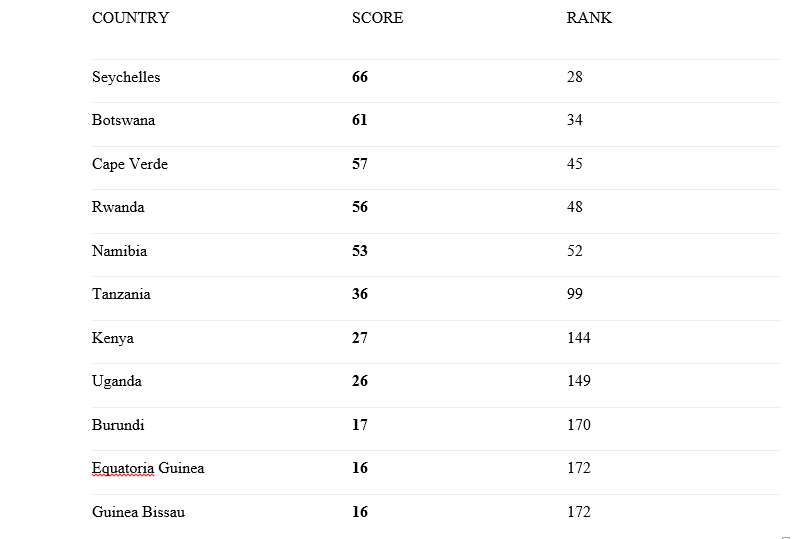