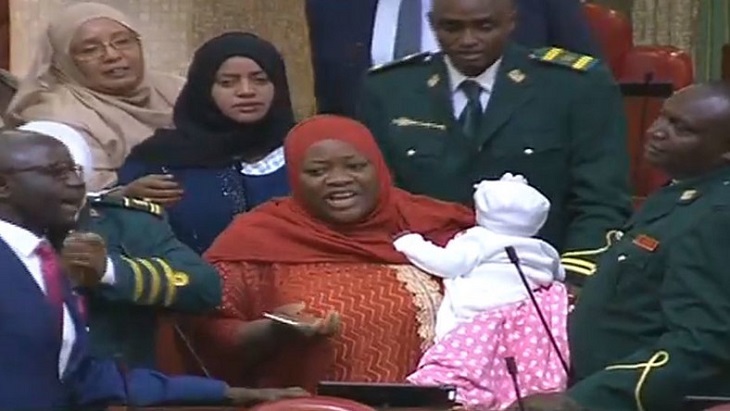 The Law Society of Kenya (LSK) has weighed in following the ejection of Kwale Woman Representative, Zulekha Hassan from the National Assembly after she entered with her 5-month old baby.

In a statement sent to newsrooms, LSK said the National Assembly went against the Health Act of 2017 that requires employers to provide lactation centers at the workplace for nursing mothers.

“Parliament is no exception as an employer. The same August House is processing the Breastfeeding Bill, 2017 and no doubt should lead from the front on protection and safeguards to breastfeeding mothers who work,” said LSK.

The LSK has termed the incident “archaic, grossly, unfair and discriminatory to not only the Member of Parliament but also to the infant.”

Zulekha was ejected from parliament chambers for “going against the standing orders” by coming with her child. The matter was brought to the attention of the Speaker of the National Assembly by the Leader of the Majority in Parliament, Aden Duale.

Breastfeeding provides unique health benefits to both the mother and the child. Breastfeeding is the healthiest start to life; it is a baby’s best vaccine and a crucial driver of the right to health.

The World Health Organization recommends exclusive breastfeeding for infants up to 6 months and thereafter diet supplemented breastfeeding up to 2 years.

This incident happened during the breastfeeding week speaks of the indifference to breastfeeding despite the known benefits and legal cushions.

This incident highlights and illustrates the plight and challenges lactating working mothers face in politics and generally leadership throughout the Nation, an intricate balancing act. It also highlights the biases and discrimination working mothers go through in employment. Motherhood does not stop.

The law protects them, yet the marginalization is rampant. This is blatant discrimination against breastfeeding mothers and infants. While other jurisdictions are supporting and embracing working breastfeeding mothers, the message being sent by Parliament is to the contrary.

Recently, the New Zealand Prime Minister, Jacinda Ardern attended the UN General Assembly in New York with her infant baby even had time to play with the child in the auditorium before addressing global world leaders.

In 2018, Australian lawmaker Larissa Joy Waters walked into the chambers with her infant and in fact, breastfed the baby while in there.

“We demand Parliament to issue an apology to Hon. Zulekha Hassan, to lead by example and provide a conducive work environment for breastfeeding staff, to have facilities for their comfort as by law required, to include but not limited to lactation centers, to uphold the rule of law and the Constitution. The Government to provide policy directives to government entities and all employers to ensure compliance with the law and protection of the various mentioned rights by not only having the facilities but by ensuring that the facilities are fully functional.”