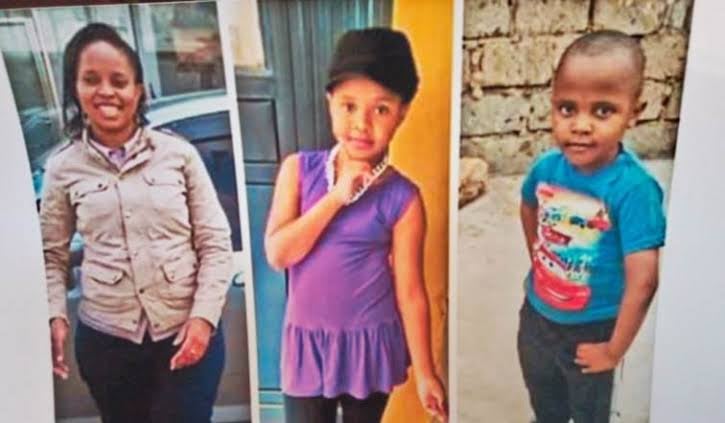 The bodies of a missing woman and her two children have been discovered by a team of homicide detectives from the Directorate of Criminal Investigation (DCI) based in Nanyuki airbase in Laikipia County.

Joyce Syombua and her two children, daughter Shanice Maua aged 10 and son Prince Michael, were found buried several meters from the Laikipia based Nanyuki Air Base.

Joyce Syombua and her two children had traveled from Kayole, Nairobi, to visit her lover, Major Peter Mugure, who is currently in custody.

Joyce Syombua left her home in Kayole, Nairobi on Friday, 25th of October 2019, to visit Mugure, her lover of 13 years at the airbase only to be reported missing on 26th October 2019.

Read: Mother and Her Two Children Still Missing as Lover is Taken into Custody

Joyce Syombua’s visit came after a court had granted Peter Mugure access to the two children.

Major Peter Mugure had earlier told police in a statement recorded on the 16th of November 2019 that he had escorted his family to Nanyuki bus stage and left them waiting to board to Kayole.

Peter maintained he had not seen or heard from them.

A cellphone that belonged to Joyce Syombua was discovered on 13th November 2019 in a Nissan registered to the 4NTE Sacco.

An official of the 4NTE maintained that the said Nissan had not ferried passengers on the said date.

The bodies of Joyce Syombua and her two children were exhumed by police officers from a shallow grave in Thingithu estate in Nanyuki Saturday, 16th November 2019, evening.

The discovery of the bodies of Joyce Syombua and her two children comes after the family reached out to the Director of Criminal Investigation (DCI).