Top Corrupt Ministries and Institutions in the Kenyan Government 2019

A joke has been made that Kenya is corruption and vice versa and the corruption cases that have witnessed are sure evidence of our corrupt nature but even in a bag of rotten potatoes, there is always one that is worst and so is our country.

In a survey carried out by the anti-corruption authority, and launched on 19th November 2019, which ridiculous has also been recorded as corrupt, the Ministry of Interior has led in the frontline as the most corrupt entity in the Kenyan government.

The survey carried out by the Ethics and Anti-Corruption Commission (EACC) reveals that Wajir is the County where demands for bribery are the highest in the third year in a row. 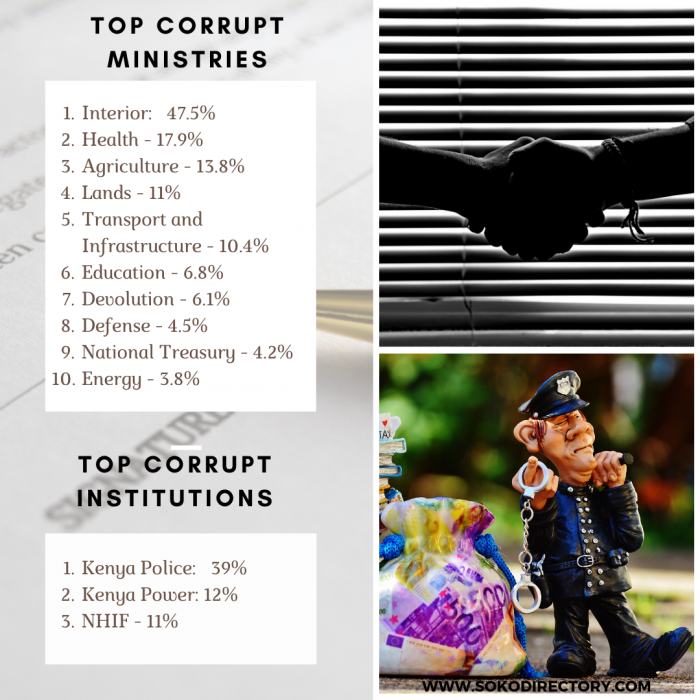 The EACC survey has noted that incidences of corruption have significantly reduced as compared to the year 2018.

The Ministry of Health which is headed Sicily Kariuki improved from 27.8 percent to the current corruption perception which is 17.9 percent.

The Ministry of Agriculture headed by Mwangi Kiunjuri is performing worse according to the survey by EACC as compared to 2018 while the Ministry of Lands registered a notable drop in the incidence of corruption from a previous 23.9 percent in 2017 to 11 percent in 2018.

The ministries of Transport and Infrastructure have a corruption perception of 10.4 percent while Education has 6.8 percent with Devolution at 6.1 percent, Defence at 4.5 percent, the National Treasury at 4.2 percent and the Energy at 3.8 percent.

Ministries whose rate of corruption perception is minimal are ministries of Environment, Petroleum, and Mining; Tourism and Wildlife, at 0.3 percent, while ICT and Industrialization are at 0.1 percent.