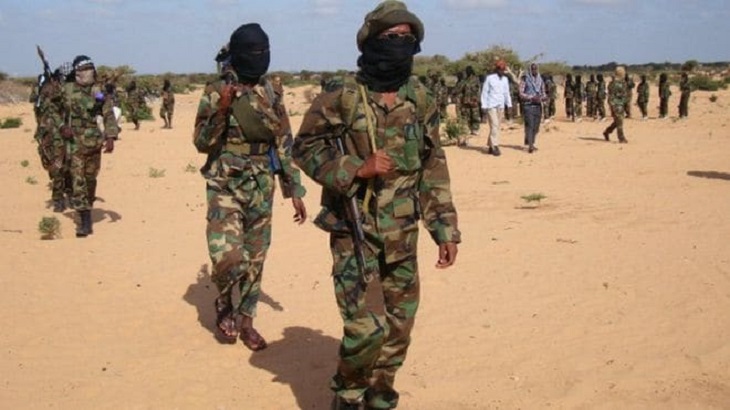 Ten people have died in an Al-Shabaab attack in Wajir County between Kutulo and Wargadud area in a Friday evening terror attack.

The ten who include seven police officers, a doctor, and two other civilians were traveling from Nairobi to Wajir County when they were ambushed by the terror group.

Four people, according to security officers who responded to the incident, were able to escape unhurt as it is reported that the Al-Shabaab spared their lives as they were residents.

The Al-Shabaab gunmen ambushed the Mandera-bound bus that was coming from Nairobi at around 5:30 pm on Friday, 7th December 2019.

It is reported that the suspected Al-Shabaab militants stopped the bus and separated the passengers aboard into two groups before releasing the bus and executing the victims in broad daylight.

The bus which was carrying 56 passengers was registered under Medina Sacco and is reported to have ferried a section of passengers who were believed to be residents as those selected by the Alshabaab were murdered in cold blood.

Two out of ten shot dead by the Al-Shabaab in the Wajir attack are yet to be identified while the seven police officers reportedly belong to the Anti-Stock Theft Unit (ASTU) and were on their way back to work when the Al-Shabaab attacked the Medina bus.

Wajir County Commissioner Loyford Kibaara said that the four survivors managed to escape from the bus through the windows and ran for their lives when the terrorists struck adding that among the survivors were three police officers together with one civilian.

“A group of armed men ambushed a bus that was traveling to Mandera on Friday evening but we are yet to get information on the casualties,” Wajir County Police Commander Stephen Ng’etich, who confirmed the incident, said.

The medina driver returned to Kutulo Police Station with the other passengers after the attack to make a report.

Mr. Ng’etich said most of the victims were police officers who were returning to their stations in Elram, Mandera County.

Mr. Ng’etich revealed that one of the officers survived after he was dressed in Somali attire by some passengers to hide his identity.

The county police boss said it is likely that the terrorists might have been tracking the victims’ movement from the time they boarded the bus in Wajir.

The attack comes barely a month since Al-Shabaab attacked Dadajabula Police Station in Wajir County in its attempt to free two terrorists who were being held in the station.

Wajir County hence seems to be experiencing weakness in the fight against terrorism.