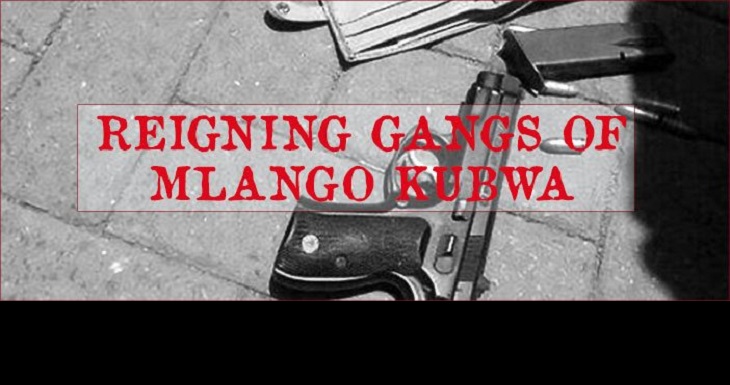 Mlango Kubwa, a small sub-slum market located along Juja Road just after Pangani Girls High School  is a part of the expansive Mathare Slum. Mlango Kubwa is a small place but what goes on within is bigger than its size.

Mlango Kubwa is home to one of the youngest vicious and upcoming cartels who have formed small groups that have taken upon themselves to determine and impose ‘taxes’ on residents for ‘services’ rendered and they are making millions every month.

Living on sex, drugs, and violence, the young cartels of Mlango Kubwa, if the police will not step in to stop them, will soon be one of the most dangerous, money-hungry and violent prone groups that will be hard to control.

At Mlango Kubwa, there are two types of ‘taxes’ or ‘levies’ that every household and business premise has to pay, failure to which attracts a serious ‘penalty’ of being clobbered to death. It is happening but security organs will tell you that there is nothing like that in that area. In fact, they will tell you that it is one of the most peaceful places in Nairobi but woe unto you if you will believe them.

Take the total number of houses and multiply it with the minimum amount of 150 shillings.

In total, the group makes a whole 1.2 million shillings a month.

Let us forget about the 1.2 million and just say that the group makes one million shillings a month. Word has it that this money goes in the pockets of a few individuals, the small gods, around 50 of them who only sit and send the young ‘chokoras’ (street children) to collect the garbage at a fee of 100 shillings a month.

The second type of “tax” levied by gangs at Mlango Kubwa is known as “security.” The gangs often collect cash from business people as well as other residents for ‘protection’.

Every house has to pay 50 shillings every month without fail to the leaders of the groups who collect the ‘tax’ while businesses pay between 200 to 300 shillings per month. Those who cannot pay risk their houses being broken into and their businesses being robbed and even being attacked and injured.

From the mandatory monthly dues alone, the gangs are making hundreds of thousands of shillings without dropping a sweat as the common residents continue to suffer under their reign of terror.