When I first saw the story of baby Nuru Deen David, I felt my ovaries go cold and a heavy wave of sadness befell me, barely two years, the little girl is now six feet under after losing her life in the most brutal manner.

The known worst pain that most people have to survive is that of giving birth, then the only pain that can be worse is that of losing one’s child to a violent act such as saw the death of baby Nuru in Kitengela at an only the age of 18 months.

Baby Nuru, the daughter of David Mutua and his lovely wife Faith Mwikali, was a bubbly and healthy child born on the 18th of April 2018 to the joy of her parents and relatives, she was brutally murdered and most likely defiled.

Baby Nuru was reported missing in her home in Kitengela, Kajiado County on the 8th of February 2020 and days of a desperate anxious search began with unfruitful hopes. 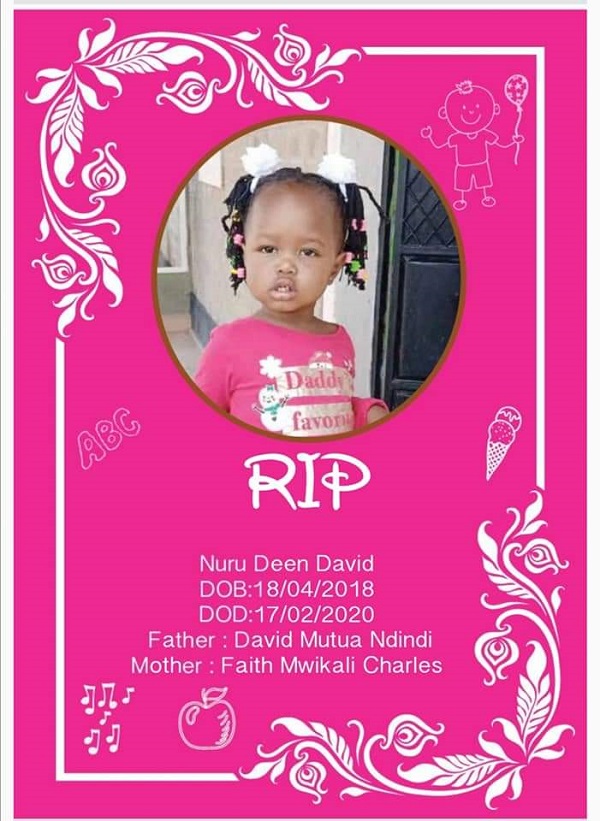 Neighbors, friends, and relatives of Mutua and his wife got in the know of the family’s desperate search of baby Nuru whose disappearance was eating up the family bit by bit as days passed on.

Faith, the mother to baby Nuru, was losing her sanity by every passing day but not even the report they had made at the police station was bearing any fruits.

Baby Nuru’s parents had reported to the police station on 8th February 2020 after an hour of searching for their young daughter did not bear any fruits, little did they know the baby lay cold on a bare floor in the same apartment they lived in.

“When we reported to the police, we were told to wait for 24 hours before they could act which we were told is the procedure, it was a long time that was followed long anxious days,” David Mutua says.

“The police went quiet on us and we were surprised when we suddenly heard a commotion on 17th of February 2020, nine days after our baby girl had gone missing outside our apartments,” David Mutua tells us saying that for a second, the hope to see their baby again filled them.

“We stepped out and watched as the police went into an empty house that we had seen our neighbor who is our caretaker go into severally in the week,” David Mutua narrates while taking a noticeably long breath that tells of the deep fresh pain.

“Our baby Nuru Deen was dead, there was only her body that had decomposed in the empty house where repairs were being done, we do not know what killed our baby and for our sanity, are seeking answers,” David Mutua says.

“When Nuru Deen crept out of the house on the 8th of February 2020 at around 6:25 pm, the one-and-a-half-year-old girl was healthy and kicking,” the father reveals.

“In less than five minutes, the mother noticed the baby had slipped out and she stepped out in what she imagined as a normal routine and begun looking for the little girl, the only difference was Nuru Deen was nowhere to be found,” Mutua, the father reveals.

David Mutua says he and his wife Faith proceeded to the police station to report as it was dark.

“We keep on asking ourselves, where did we go wrong as her parents, we feel like failures for our baby girl to have gone through such pain in our absence,” Nuru Deen’s father says.

Nuru Deen, according to her father David Mutua Ndindi, at only one-and-a-half-year-old, was found dead in a vacant house in the same apartments the parents lived.

“We also suspect that our baby’s body was hidden in that house to rot with the intention of making it difficult to carry postmortem, it is difficult and we keep on wondering where did we error to deserve this kind of inhumane act,” David speaks.

“We seek justice, we need justice, desperately, we seek answers to our questions,” the baby’s father says.

“Our baby, Nuru Deen, disappeared on Saturday, the 8th of February 2020, the house where her body was found was accessed on Sunday, Monday and Wednesday the 12th of February 2020, by the caretaker, how come he did not notice the smell, the blood or the body?” Nuru Deen’s parent’s pause.

Nuru Deen’s father reveals that it was the caretaker that reported as having found the body of their child in the same vacant house he had accessed since the child went missing.

“The caretaker did not tell us when he ‘found’ the body despite him knowing that our baby had gone missing for months, he went to the police station and we only got to know it from the police despite the man being our neighbor,” Mutua says.

The body of Nuru Deen was recovered on the second floor of the apartment in a house that was vacant, three houses from where she lived with her parents, according to her father, the only person that had a key to the house was the caretaker.

Nuru Deen was laid to rest on Saturday, the 22nd of February 2020, in an emotional ceremony even after which the mother is yet to come into terms with the pain of the brutal turn of events that snatched the life of her daughter.

“The life Nuru Deen cannot be brought back, we shall never see our daughter again, this has been a dark month for my family and I and the wounds…the wounds will stay with us but we need to make sure the kind of pain we are going through shall not be felt by another parent,” Mutua.

“We need justice for Nuru Deen, justice for is closure for us and a safer society for our children, no child should be brutalized, no parent deserves to live with this kind of pain, give us justice for the brutal murder of our toddler, our one and half-year-old Nuru Deen,” the father, Mutua concludes.