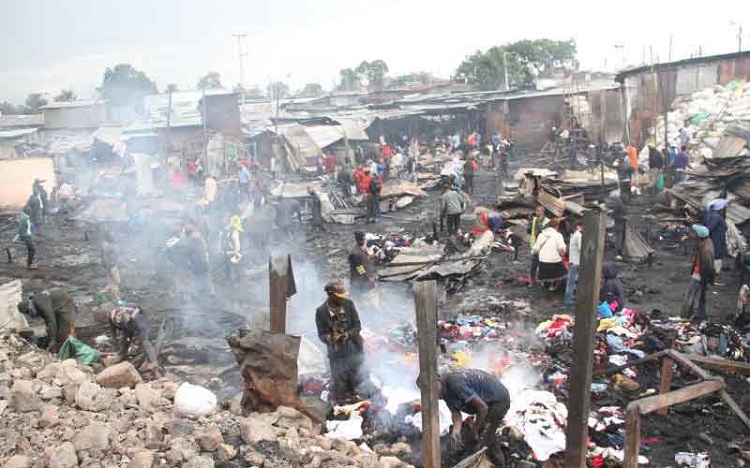 Traders at the Gikomba market seem to be the real sons and daughters of a lesser god. As if a series of fires that have been burning down their businesses is not enough, “goons” demolished their stalls on the morning hours of Tuesday.

Traders woke up to a rude shock of their stalls demolished and their products stolen by “unknown” people leaving thousands of them without a business and an investment.

Late last month, a fire burned down a section of the Gikomba market, leading to losses in millions of shillings. The following day, traders tried to put up new stalls but they were demolished by youth dressed in National Youth Sevice (NYS) attire.

The fact that the NYS youth were being protected by heavily armed police officers meant that the government was most likely behind the fire incident even as “investigations” went on.

Gikomba market has been experiencing a series of fires with every inquest coming out with no tangible cause of the fires. Some traders have lost their lives and thousands of others have never recovered from their losses.

President Uhuru Kenyatta issued a directive to investigate the cause of the fires in 2017, those mandated with the task together with the proceeds of their investigation never reported back to the public even as the fires rage on.

Who is frustrating the traders from Gikomba? Why? Is it the government?