West Kenya Applies for A Joinder In Mumias Sugar Proceedings

Meanwhile, CAK says that no merger approval has been submitted about the leasing of the sugar plant and its related assets and, therefore, Ramana Rao’s decision to hand over the assets is in total violation of the law.

Worse still is that if West Kenya had been given the opportunity to run Mumias Sugar Company, farmers and shareholders would have been paid in 18 months. But now, with the current investor, they will have to wait for a whole decade!

West Kenya Sugar Company has made an application to the High Court to join as a party to the proceedings regarding how the bidding process for the Mumias Sugar Company Ltd was conducted.

In an affidavit on January 19, 2022, Ponangipalli Venkata Ramana Rao “made absurd and illegal averments to justify his decision not to award the lease to West Kenya.” And therefore, the company is a necessary party to the proceedings.

West Kenya Sugar Company says that the leasing of Mumias Sugar to Sarrai Group was conducted without transparency and accountability and that it fell short of the principles of the statutory duties the receiver-manager has in the treatment of all creditors.

The court application noted that the entire process was “shrouded in secrecy and opacity” and the receiver-manager breached their imposed duty of full and frank disclosure.

By disqualifying West Kenya on a personal determination of dominance, it violated the CAK’s provisions of Section 23(2)(a) of the Competition Act 2010.

It is also worth noting that the calculation for dominance didn’t include imported sugar as is the practice in evaluating market size.

Meanwhile, CAK says that no merger approval has been submitted about the leasing of the sugar plant and its related assets and, therefore, Ramana Rao’s decision to hand over the assets is in total violation of the law.

In September 2019, Mumias Sugar Company was placed under receivership by KCB Group to protect its assets and maintain its operations. To secure its assets, the lender floated the idea of auctioning the plant but was barred prompting it to turn to the lease option.

When calls for bidding were opened to help save the ailing sugar plant, West Kenya Sugar Company was among the successful bidders. Others included the New Mumias Sugar/Devki Group, KE International, Kruman Finances, Pandal Industries, Kibos Sugar, and Sarai Group.

Each of these companies had a specific timeline on long it would take to revive Mumias Sugar. New Mumias Sugar/Devki Group said it would take 12 months, West Kenya was said 18 months while KE International said 90 months.

Pandla Industries, on the other hand, said it would free the sugar company of debts and other obligations in 38 months, Kibos Sugar 130 months, and Sarai Group 124 months. 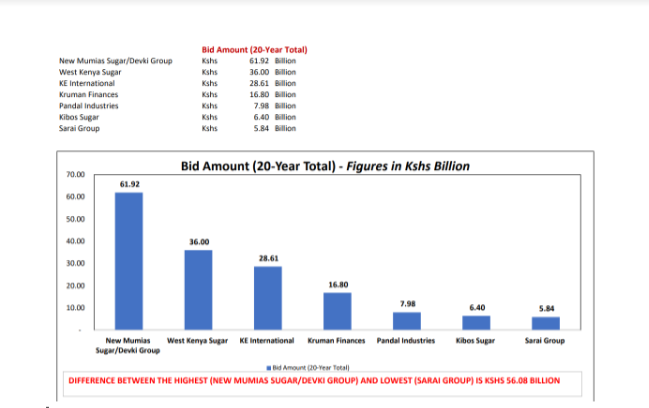 The lease, eventually went to one of the lowest bidders, Sarrai Group, which led to the suit challenging the legality and propriety of the process. The quibbles are not exactly unfounded. The receiver scored Sarrai Group 100 percent (shown below) for demonstration of corporate responsibility without doing due diligence on cases of displacing villagers and grabbing forests using soldiers in Uganda.

Hoima Sugar Company, which is under Sarrai was, in August 2021 accused by residents of Rwekobe and Rwembaho villages in Kabwoya Sub-County for grabbing their land for sugarcane growing.

In a similar event, Sarai’s Kiryandongo Sugar Ltd was at the center of violation of human rights when it was sued for the planned eviction of over 10,000 families for sugar cane farming.

The big question is, what due diligence was conducted? How did the receiver-manager give Sarrai Group a score of 100% without considering the legal cases it has, over the years entangled itself in?

It is apparent that Ponangipalli Venkata Ramana Rao did not undertake due diligence to fairly and properly assess and compare the various bidders. It made irrational decisions and judgments to disqualify bidders on grounds that are absurd, patently incorrect, and which cannot be justifiable.

Worse still is that if West Kenya had been given the opportunity to run Mumias Sugar Company, farmers and shareholders would have been paid in 18 months. But now, with the current investor, they will have to wait for a whole decade!