A War In Eastern Europe Exposes Old Weaknesses In Mozambique 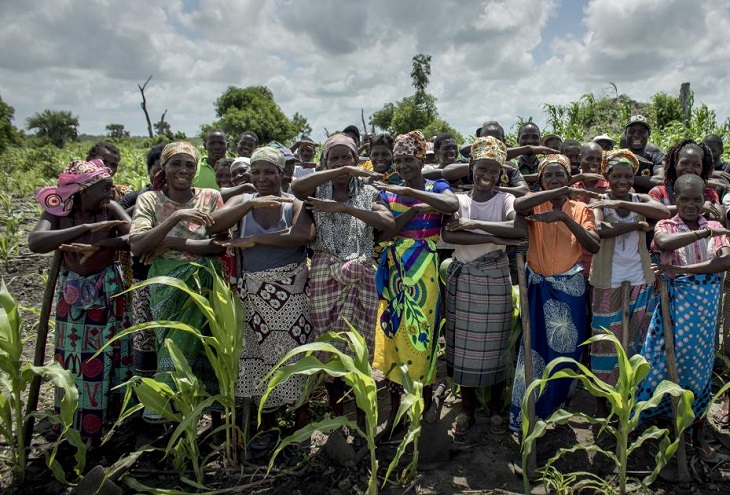 Mozambique has always been subject to persistent food insecurity, due in part to low investment in food production and natural disasters. Now it is witnessing on its doorstep a shock coming from the Russian-Ukrainian war – sharply rising food prices.

Matilde Jose, 40, is a vegetable saleswoman in the city of Chimoio, central Mozambique. Sitting in a stake and grass tent in a pink blouse with white straps, she talks about difficult days for herself and her children. “Life is expensive. The price of rice, corn, and oil is rising”, she said. “It’s getting harder and harder to get food for my kids”, she added. With the rise in prices of essential goods many low-income families like Matilde’s, are struggling to put food on the table.

According to official statistics, in the first half of the year Mozambique recorded the biggest price increase in five years (11.7 percent), with the price of food products rising by 17.9 percent). According to experts, the war between Russia and Ukraine reveals only “an old phenomenon”: weak investments in food production.

“Food production has not been considered a priority”, commented Antonio Souto, a Mozambican senior economist, who is an expert on agribusiness. Instead, “investments in agricultural production have been focused mainly on the production of export goods such as tobacco, cotton, cashews, sugar and, more recently, sesame, soybeans, and sisal”, he said. As a result, Mozambique has become an “importer of maize, rice, food oil, and other essential goods to ensure food security”.

Mozambique is one of the eight largest wheat importers from Ukraine and Russia in sub-Saharan Africa, according to IMF data. From Ukraine, Mozambique also imports fertilizers and food oil. Mozambique’s productive dependence on the two countries in the food sector as well as “the outages caused by the recent pandemic exacerbate trade deficits and make imports more expensive”, is the reason for the rise in the price of essential goods in the country.

Intraregional trade could be an alternative to alleviate the burden, but Mozambique’s food production sector is far from taking advantage of the opening of regional borders. At the southern African level, Mozambique is also dependent on imports of food products from South Africa, one of the region’s largest economic players. “In the region (Southern Africa) we do not yet have comparable economies, as South Africa persists as the large and only industrial hub, and Mozambique has no manufacturing industry, particularly in the food chain sector”, Souto said.

Despite these international and regional constraints, Mozambique is trying to run faster to solve problems of domestic productive inefficiency. The government in August 2022 adopted a package of measures for the agriculture sector, including a reduction of the tax of companies in the agricultural sector from 32 percent to 10 percent, and an exemption from VAT on imports of agricultural inputs. At the time, President Filipe Nyusi called on the private sector to start investing in wheat production, “It’s possible”, he said.

The measures, though, are considered by some not to have gone far enough. “The priority should be creating conditions for the millions of smallholder farmers or family farmers to improve the productivity of their food crops and ensure that the thousands of families affected and displaced by disasters and war can restart production in a more resilient way”, Souto said.

Difficult access to finance and technology are some of the constraints that many family farmers face. “The financial instruments needed to reactivate the network of thousands of rural traders is of extreme importance because one of the worst fatalities of agricultural production is post-harvest losses”, the agribusiness expert considered.

Francisco Correia, 50, leads a smallholder farmers’ association called Nzara ya Pera (famine is over) in Vanduzi (Manica), central Mozambique, which is producing soybeans in an area of 50.6 hectares. “We produce these crops because they are tolerant to drought”, he said.

The association of about 40 smallholder farmers is an example of how technology transfer and partnerships can boost agricultural production and increase the income of rural families. The association sells the surpluses to entrepreneurs in the poultry and livestock sectors. In addition, members of the association use part of the production to feed their families.

“We have a lot of income, and our children live nourished and grow well”, Francisco said.

Benefiting from the support of the pan-African agricultural support organization the Alliance for a Green Revolution in Africa (AGRA), the Nzara ya Pera association has been working in partnership with Phoenix Seeds, an improved seed production company. A partnership between the association and the company began in November 2021 and is already bringing benefits to smallholder farmers. “The company offers us improved seeds and guarantees the purchase of our surpluses at a good price”, said the association’s leader.

In addition to encouraging partnerships between smallholder farmers and businesses, AGRA supports farmers in agricultural production technologies and

technical support to the company in the production of improved seeds. According to the Phoenix representative, Jorge Shibhanda, the company has the capacity to produce 3,000 tons of seeds, but due to the lack of market makes it produce half its capacity.

With the support of 180 workers, the company produced approximately 1,500 tons of seeds for crops such as Themba beans, corn, sunflower, and others.

At least 160 of Phoenix’s workforce is made up of female farmers. “We have many widows, divorcees, and single women who support their families through this work”.

According to AGRA representative Benvindo Verde, the organization carried out interventions for the development of agriculture in several areas, with emphasis on improved seed production.  “Our goal is for this seed to reach producers through distribution mechanisms on the market and for producers to be able to use these seeds”, he said.

Another area of intervention that had a great impact on the lives of smallholder farmers was the conduct of studies for the formulation of fertilizers suitable for the different types of soils in the country. “We are teaching producers about the advantages of using proper fertilizers and with that, we expect an increase in food production”.

However,  these activities ran into some challenges. The floods and cyclones in the center and north of the country, and the covid-19 pandemic are just a few examples. “There has been some cost impact on some projects and this has forced us to redirect some strategies to their implementation”, said Benvindo.

In addition to external shocks such as the Russian-Ukrainian war, Mozambique suffers cyclical natural disasters such as cyclones, droughts, and floods that compromise food production. However, the country does not have a strategy to protect and make the food sector more resilient.

“What has been done are the well-known post-disaster relief and assistance interventions”, Souto, noted Ted.

In October this year, the European Union announced a €23 million grant to help Mozambique mitigate food insecurity caused by uncertain weather and macroeconomic conditions. Funding will be channeled to programs to sustainably increase food security and resilience.

In addition to implementing the strategy to address natural disasters, Souto argues that “policy and economic decision-makers in Mozambique should focus more on concrete measures, on the effective implementation of a food security strategy”.