Foreign financial institutions in the Kenyan Banking industry are being urged to adopt their models to fit within the African dynamics according to Cytonn Investments.

The Kenyan investment firm Cytonn when releasing the Banking Sector Report for year 2015,’ A sector in volatile transition’ on Tuesday in Nairobi said foreign banks have not done very well in adapting to the African Dynamics.

“When it comes to local versus the foreign banks in the industry, they can be divided into the haves and have not’s; those who have found a niche and those willing to adapt to the African With the impending exit of Barclays Plc from Africa, it has brought to the forefront displacement of foreign banks such as Standard Chartered, Barclays and Citibank from their perch as the key providers of banking solutions, evidenced by the receptiveness of local banks to the rapidly evolving banking landscape in terms of mobile money, agency banking and informal sector banking dynamics.”

This is a similar view according to the 16th edition of Private Sector and Development magazine, published by French lending group Proparco, who noted that Foreign bank subsidiaries have gradually lost their dominant position.

“While the banking landscape was once dominated by foreign institutions, the local operators who appeared on the scene in the 1980s have made rapid advances and have now moved centre stage. These local banks, which fuelled their growth by developing customer segments disregarded by the foreign banks (small and medium enterprises (SMEs) and retail banking in particular), have now reached the critical size that allows them to compete with the international banks in their markets, especially in the large corporates segment. Local banks have thus rapidly grown their market share and they have been the main drivers of the continent’s banking sector growth over the past decade,” Julien Lefilleur, Editor in Chief. 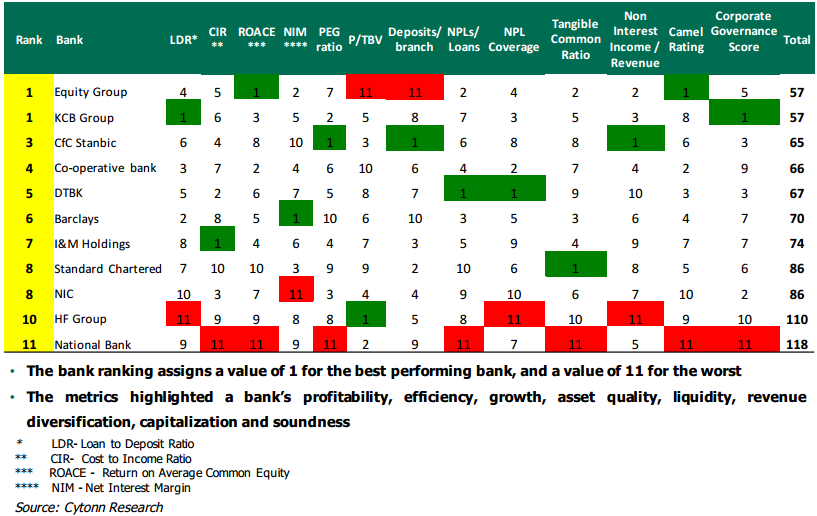 Cytonn reports says the top tier in the banking sector led by Kenya Commercial Bank, Equity Group Holdings limited, Cooperative Bank and the I and M Bank have a clear strategy, they are more efficient in business besides being in a competitive environment.

“Barclays is struggling to adopt in the local operations and our report shows it declined to position three, but has the highest interest margins.”

READ: The State of banking in Kenya, a Story of Numbers.

The report further cites three transitional areas for Kenyan banks which include: sectorial realignment, better governance and increased regulation. It projects going forward there will be more consolidation. “We maintain our view that Kenya is over-banked with a relatively, high ratio of banks total population, with 42 commercial banks serving 44 million people compared to Nigeria’s 22 for 100 million and South Africa’s 19 for 95 million. This has led to the consolidation of banks through acquisitions such as Giro Banks by I & M Holdings.”

Further, as more banks feel the pressure on consolidation with a section of the Kenyan banks being placed under receivership – Imperial Bank, Dubai Bank – the rest are trying to meet the existing capital adequacy requirements.

Thus, the analysts further note that going forward, Capital Markets Authority and the Central Bank of Kenya will need to enforce their regulations, put more technical teams to address the emerging corporate governance problems citing reports on the governance crisis at the National Bank of Kenya.

The Banking Sector Report for year 2015 ranks National Bank of Kenya as the worst performer in 2015. It registered a loss, with a negative return on equity at (9.9%) and their NIM at 6.4%, which was the third lowest in the market. In addition, NBK scored the lowest governance score among listed banks. The stock has a 34.7% downside.

It also scored the lowest on governance among the listed firms. 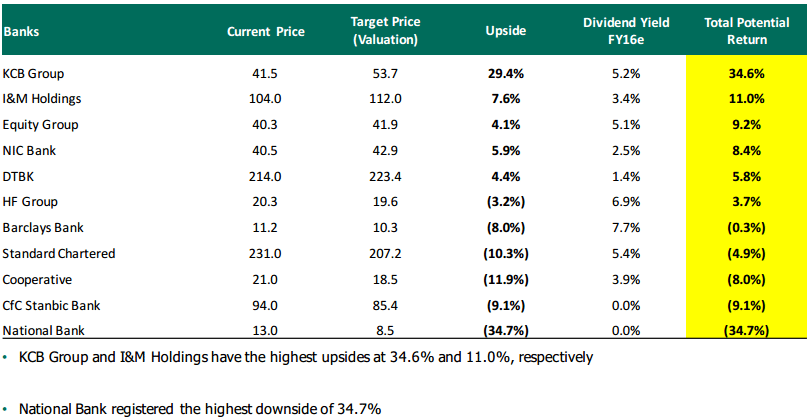 KCB topped the ranking amid a restrictive macro-environment that saw the whole banking industry struggle to mobile deposits.

However, the most improved lender was the I&M bank which moved up 3 places to sit at position four, thanks to its improved operating efficiency and efficient distribution channels. “This was boosted by (i) an increase in the banks’ operating efficiency with the lowest cost to income ratio of 40.0%, and (ii) increased focus on more efficient channels of distribution like agency banking and internet banking.”

Read more on the Cytonn blog.